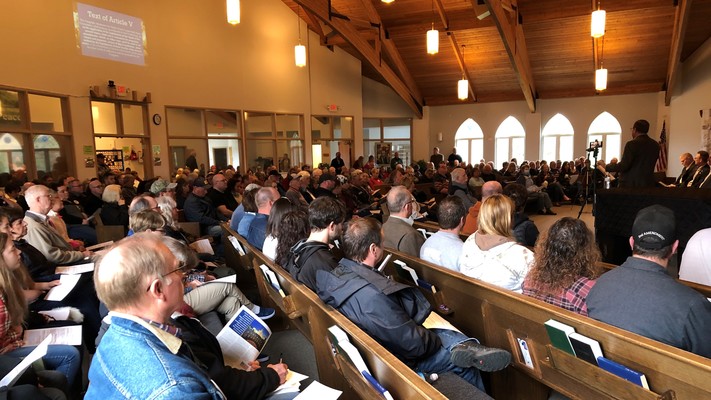 After a year-long hiatus of town halls in Minnesota, we are back and bigger than ever. Hundreds of concerned Minnesota patriots attended the Convention of States town hall held in Clear Lake on Saturday. Five Minnesota legislators were also there to speak on the subject and to show their support.

The COS presentation was given by District Captain Kevin Fuhrman and Legislative Liaison Steve Davidson, and the Q & A session which followed the presentation was lively and engaged, just as you'd expect.

Former MN Representative Jim Newberger helped to direct questions to his colleagues at the event.

Senator Andrew Matthews was asked what can unify Americans behind the Convention of States movement, and he answered that everyone, both sides of the aisle, can agree that federal debt is out of control and dangerous to our future as a nation.

Representative Eric Lucera was asked how a convention would actually function, and he gave the insightful analogy with how the Electoral College operates, where electors are given instructions by the state legislature to carry out a very specific task.

Representative Cal Bahr stressed the point that with the financial and regulatory burdens placed even on our churches, we are already experiencing a form of "soft fascism."

Representative Dale Lueck summed up what the result might look like from a 30,000-foot view: A judicial system that simply referees and does not write law from the bench, and a federal government which is restrained from expanding its own scope of powers.

Representative Shane Mekeland gave the analogy of waiting to go to see the doctor until your disease has progressed to the point where it is no longer treatable, warning that the US may be nearing this "too late" point soon.

To view the video recording of the town hall, visit the page on the Convention of States Minnesota Home Page using the link below, just under this image showing you where you click in order to bring up the video. 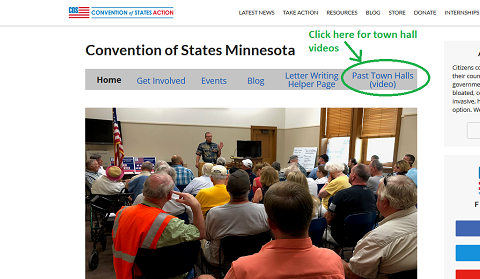 Notice that, on the home page, there is also a link to the upcoming Events in Minnesota! The events in the near future are listed below in this newsletter, but check the website periodically to learn of any updates or of any new events that get added.

Minnesotans are hungry and even desperate for getting back to constitutional governance, or originalism, as envisioned by the Founders. This is portrayed by the huge attendance and the lively engagement of the crowd in Clear Lake.

The United States of America was formed on crucial founding principles, such as the liberty of self-governance, which led to our nation becoming known worldwide as the Land of Opportunity. While even a quick look around shows that we have definitely lost our way recently, there is still much reason for hope.

The Founders foresaw the predicament that we find ourselves in today. They added a "fail-safe" switch which can be turned on if the federal government usurps the constitutionally-confined authority which the Founders intended and which the several states were willing to accept.

That fail-safe switch is an Article V convention for the purpose of proposing constitutional amendments to reverse federal overreach. Working together, we can help to restore the crucial founding principles of governance to the United States, which will put us back on a path to peace and prosperity.

To learn about possible ways to help this cause in whatever capacity that you can, use the link above to get to the our Home Page and then click that first link at top left which says "Get Involved."

Our Mission: To grow a strong, engaged army of self-governing grassroots activists.