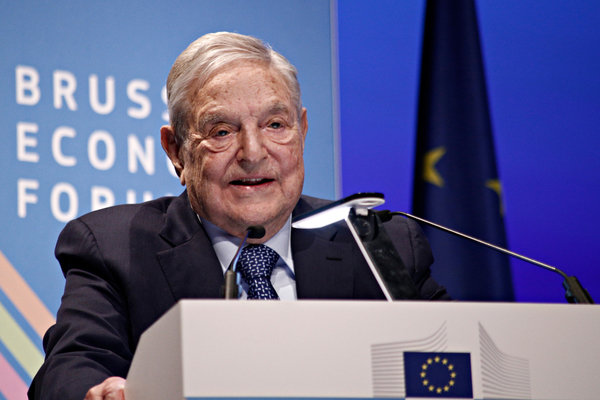 Speaker of the House Nancy Pelosi has ramped up her attacks against Facebook in recent weeks, and now billionaire and anti-Article V activist George Soros has joined her.

In a recent editorial published in The New York Times, Soros argues that Mark Zuckerberg should no longer be in control on the company he founded.

“I repeat and reaffirm my accusation against Facebook under the leadership of Mr. Zuckerberg and Ms. Sandberg,” he concluded. “They follow only one guiding principle: Maximize profits irrespective of the consequences. One way or another, they should not be left in control of Facebook.”

Soros cites Section 230 of the Communications Decency Act, which immunizes most large social media platforms from liability for defamation. Without these protections, social media companies would be forced to follow government protocols for what they can and cannot allow on their social media accounts.

Soros, in other words (like Pelosi), wants the federal government to have a much larger say in what gets published on social media platforms like Facebook.

He doesn't say that, of course. Instead, he claims he wants Washington to control Facebook to keep President Trump from being elected.

“Facebook helped Trump to get elected and I am afraid that it will do the same in 2020,” Soros says.

“I believe that Mr. Trump and Facebook’s chief executive, Mark Zuckerberg, realize that their interests are aligned — the president’s in winning elections, Mr. Zuckerberg’s in making money."

Soros is no doubt scared of Trump's reelection. But there's a larger plan at work. By attacking Facebook and other social media platforms as dangerous and unregulated, Soros is pushing to centralize power in the hands of bureaucrats and politicians in Washington (who can be influenced by billionaires like Soros).

Once Washington secures the power to regulate what people post on social media, there's no going back. They'll have the power to control which posts go viral, what stories get attention, and what issues people care about.

We have to build firewalls against this kind of government overreach before it's too late. We can't trust D.C. to make the right decision, which is why millions of Americans have turned to the states.

An Article V Convention of States is called and controlled by the states and has the power to propose constitutional amendments that limit the power and jurisdiction of the federal government. It takes 34 states to call such a convention, and 38 states to ratify any amendment proposals that come out of the convention.

The Constitution says nothing about controlling what people post on social media, and they shouldn't have the power to do so. A Convention of States can propose constitutional amendments that clarify this basic principle and put the people back in charge of their own online activity.

If you want to join the only nationwide grassroots movement capable of limiting Washington's power, sign the petition below!