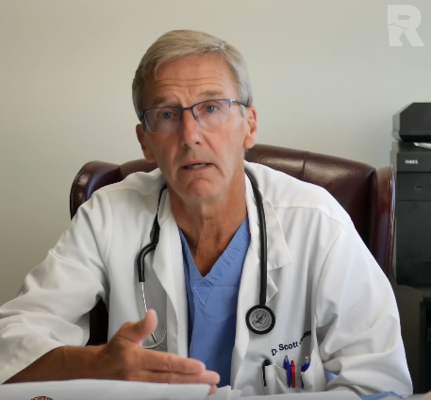 Minnesota State Senator Scott Jensen (Senate District 47) is a physician and has been successfully treating patients for about four decades, even receiving the Minnesota Family Physician of the Year award [1] in 2016.

On April 7, 2020, Dr. Jensen appeared on the Point of View Podcast with Chris Berg [2] to complain about a memorandum revealing an unprecedented change in the procedure for coding deaths. According to the memo, suspicions of COVID-19 as a cause of death would be acceptable as the formally documented cause of death--even if those suspicions remain unconfirmed.

Dr. Jensen noted in the interview that this is a break with conventional protocol, which did not allow for unconfirmed suspicions to be acceptable as a formal cause of death.

It's important to get accurate statistics on deaths and disease, because it affects outcomes, not just in the here and now (with regard to resource allocation, disease modeling, and the ability to understand if a change in treatment or medical response has truly helped or not) but also in the future, especially regarding prioritization of private and public funding toward combating various diseases.

Because accurate statistics are vital guides for action, changes to procedure that risk inaccuracy should be scrutinized. Dr. Jensen was brave enough to speak up and speak out about the potential pitfalls of such an unprecedented policy change.

However, a couple of months after the interview with Chris Berg--and after further interviews of Dr. Jensen on the subject, including interviews on The Ingraham Angle on Fox News--Dr. Jensen was notified that he was being investigated by the Minnesota Board of Medical Practice regarding two anonymous complaints.

One complaint concerned spreading misinformation about the COVID-19 death toll, and another alleged he was giving reckless advice by comparing and contrasting COVID-19 to influenza.*

By law, the board must investigate all complaints received, but the sobering fact that anonymous complaints regarding merely breaking with an "official" narrative might lead to some kind of reprimand--and will definitely cost Dr. Jensen some of the time and energy he might have spent on patients and even on state legislation--has a chilling effect on further debate.

Dr. Jensen posted a video response [3] to the notification that he was being investigated. In it he gives a dire warning to us all: "If this can happen to me, my view is...it can happen to anybody. I've been a family doctor for 40 years..."

Having anonymous power to silence "unofficial" opinion would be a terrible thing, because of perverse incentives to turn all subject matter differences into legal matters (ie., to criminalize disagreements, where someone is actually punished for attempting to move a discussion forward by challenging a previous, popular, or "official" notion).

In medieval times, disagreement with the established authority might have resulted in severe punishment, but these are not medieval times.

The American experiment started out as a break with the past, where differences of opinion had often been settled by violence and punishment rather than by words. We came together as a new nation in order to live better than that.

The current situation is a fluid one, and it is precisely those times when different perspectives must be heard in order to prevent the counterproductive outcome of having a response that is worse than doing nothing.

Also, if the complaints involve a reckless spreading of misinformation or advice, then what about the previous recklessness in judgment of our very own authorities?

After some state governors had been discovered to have been placing COVID-positive people back into nursing homes and other long-term care facilities, it was revealed that a March 13 directive from the Centers for Medicare & Medicaid Services (CMS) had issued a guidance letter allowing for that policy, as depicted by an excerpt from page 5 of the letter [4]:

“Nursing homes should admit any individuals that they would normally admit to their facility, including individuals from hospitals where a case of COVID-19 was/is present...”

While this guidance already seems counterintuitive since the elderly are at such a high baseline risk of harm from COVID-19, the guidance letter does list some precautionary steps to take.

Even still, on the day before this "official" guidance letter, a research report from the Journal of the American Geriatric Society [5] had come out with medical advice to avoid the spread of COVID-19 in nursing homes and long-term care facilities "at all costs."

Because this medical advice contradicts the guidance letter from CMS, one of them may be considered reckless. And it didn't take long to discover which one of them was being reckless, because the death toll started to rise in nursing homes and long-term care facilities after the CMS advice was followed [4].

This example shows the importance of maintaining open lines of communication and vigorous debate, even in conditions which have been characterized as national emergencies. It cannot always be known beforehand whether the official advice is the least-reckless advice available.

Bureaucracies can be, and often are, just plain wrong.

If we cannot engage in the discussion because even just veering from an official narrative is becoming criminalized, then that is a signal that the American experiment has failed--and that we are returning to the backwards, medieval system where a disagreement with the king comes with severe punishment.

A Solution as Big as the Problem

We need to keep in mind that we do not have to sit back and let our country backslide into a draconian police state where critics are silenced either by force or by threat of force. Our Founders included a special section in Article V of the U.S. Constitution, allowing for us to reduce the size and scope--and to increase the accountability--of our own federal government.

In an age of Cancel Culture where people are being "deplatformed" or silenced for holding opinions contrary to the official narrative, we need to act now to restore the liberty of self-governance which we had enjoyed for more than a century in America.

Let's hold our state legislators' feet-to-the-fire on this one, and convince them to use the power they were given in the U.S. Constitution in order to call a Convention of States so as to put an out-of-control federal government back into its constitutional box.

*Footnote: Comparing one disease to another one is not inherently wrong and can often help to add vital perspective to the situation so that people can make better decisions. Pandemic flu is the strongest kind of flu, and even CDC data show that the pandemic flu of 1968 killed 100,000 [6] at a time when the US population was 200 million (death rate: 500 deaths per million population). That death rate of 500 per million, transposed onto our current population of 330 million, would be equivalent to 165,000 deaths, which is an amount that is at least in the same ballpark as those being reported for COVID-19.