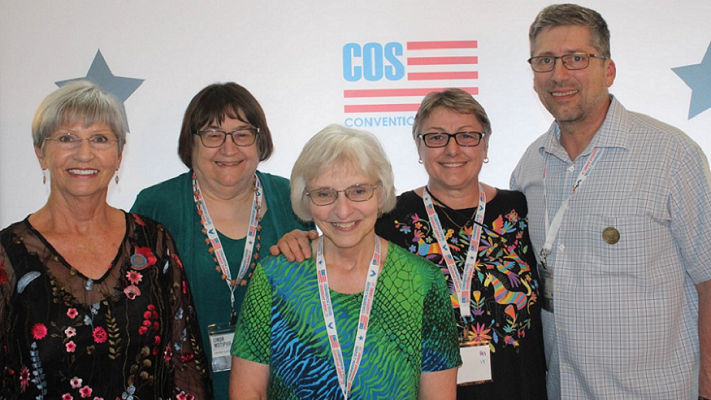 The 2019 Convention of States Leadership Summit took place from August 22 to August 25 in Colonial Williamsburg, VA, and it was a wild success.

In the photo captured above, you can see the moment our own State Director Jackie Burns had the opportunity to be on stage and personally thank Mark Levin for inspiring her to get involved with the Convention of States movement. Just look at her face to see how giddy she is to thank her inspiration.

Mark Levin gave the keynote address on Saturday night. He admitted that he was against a Convention of States at first, until he studied it.

Levin emphasized the important truth that "ideas matter." He noted that in America, we are "free to be free. We are not witnesses to history here. We are history."

He told the story of Dr. Joseph Warren, who played a crucial role in lighting "the fuse for liberty" and being an early leader of "the resistance"--helping to lead the Boston Tea Party.

This story of an unsung hero is not what you get from conventional history books, but it is part of our story.

"Our nation is full of heroes like this," Mark concluded. "Now it's our turn." He ended with an evaluation of the importance of this fight.

The Summit was jam-packed with presentations by great speakers. COS President Mark Meckler and historian David Barton kicked off the event on Thursday night with gobs of hope, knowledge, and inspiration.

The event wrapped up on Sunday morning with a worship service given by Board Member Tim Dunn, who teaches at Midland Bible Church in Midland, TX. You can watch videos of the Summit sessions on the Convention of States Facebook Page by clicking on Live Videos in the left side-bar.

However, to get more of a hands-on feel for the excitement and encouragement given directly at the event itself, take a look at the expressions on the faces of these characters.

The next Convention of States Leadership Summit is already being planned to occur at around the same time next year.

Our Mission: Build an Engaged Army of Self-Governing Grassroots Activists.