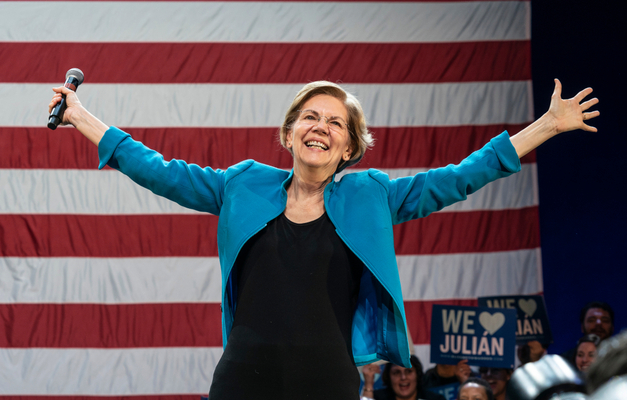 The Founders of our country fought and died to keep tyranny from taking root and growing in our country.

They believed that the government should be of, by, and for the people. Government officials should not make decisions without the consent of the country's citizens, which is the genesis of the famous "no taxation without representation" mantra.

Sen. Elizabeth Warren is a far cry from our Founders, and not just as it relates to her mental capacities. The senator from Massachusetts doesn't believe in the Founders' founding principles. She believes that the president should make decisions without the consent of the peoples' representatives in Congress, and she's perfectly happy to encourage Biden in his authoritarian tendencies.

In a recent interview on CBS News' "Face the Nation," Warren called on Biden to forgive student loan debt without going through Congress.

"Look, we know that the president has the authority to cancel student loan debt. And the best way we know that is because Obama did it, President Trump did it, and President Biden has now done it repeatedly," Warren claimed. "Not everything has to go through Congress."

Such a move would be disastrous for an already overheated economy, not to mention the $30 trillion national debt. And yet, Warren still believes We the People -- who would be most affected by this decision -- should have zero say in the matter.

She is right about one thing: presidents from both parties have used their unconstitutional power to circumvent Congress. The use of executive orders has risen in the past few decades, and neither party has been able to resist the call of authoritarianism. Some presidents have used these orders for better ends than others, but all have exercised authority without seeking the approval of We the People.

It shouldn't be this way. Congress -- and only Congress -- should make laws. Not the president. Not bureaucrats in the federal government. Not "public health experts." Not justices on the Supreme Court.

If a non-congressional body or official makes a law, that law has not been approved by We the People. Such a system is an affront to the Founders' vision and an insult to those who gave their lives for freedom.

The president will never willingly give up his power. Fortunately, we can take it from him -- peacefully, legally, and effectively.

An Article V Convention of States is called and controlled by the states and has the power to propose constitutional amendments. These amendments can strip the president of his power to impose executive orders and extra-constitutional mandates, prohibit the Supreme Court from legislating from the bench, and force Congress to do its job and vote on all new laws and policies.

This complete package of amendments can restore the Founders' vision for our country and put We the People back in charge.