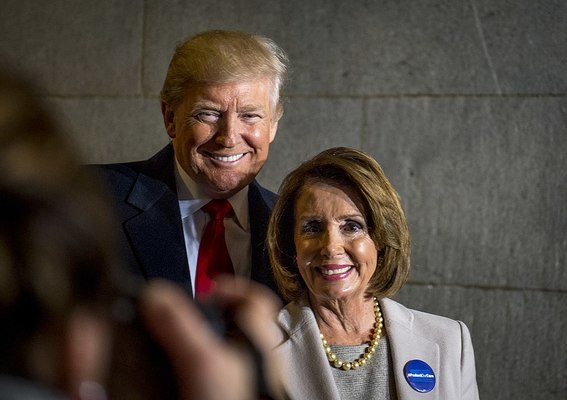 Who says Democrats and Republicans don't agree on anything?

Even while the Democratic Congress has been working tirelessly to impeach the President, they've been working with the White House to pass and sign legislation that will add a staggering $4.7 trillion to the national debt through 2029.

The Committee for a Responsible Federal Budget warns that the increasing debt could reach the record levels set after World War II:

"Thanks to legislation passed since 2017, the nation is facing trillion-dollar annual deficits for the foreseeable future without action is almost certain to surpass the record debt levels set after World War II in the coming years," the group said.

It also warned debt was "rising on an unsustainable path."

Amidst all the good that President Trump has done during his time in office, this is an extremely unfortunate precedent. Republicans used to at least pay lip service to fiscal responsibility. Now, both parties have thrown that out the window.

This is precisely what the framers of the Constitution feared when they wrote Article V. They worried that an overreaching, unthinking federal government would never propose amendments to limit its own power, which is why they empowered the states to propose amendments at a Convention of States.

A Convention of States is called under Article V of the Constitution and has the power to propose constitutional amendments. These amendments can do what Congress never will: impose real fiscal restraints on spending and taxation.

Right now, Congress has no requirement to balance the budget. It can simply raise the fake "debt ceiling" every time it's convenient, and pass a "continuing resolution" to keep from making tough spending decisions.

With a complete package of constitutional amendments, we can force them to cut useless spending, hold their federal agencies accountable, and spend taxpayer money responsibly.

We owe it to our children and grandchildren to stop the runaway train in Congress before it's too late. Sign the Convention of States Petition below to get involved!