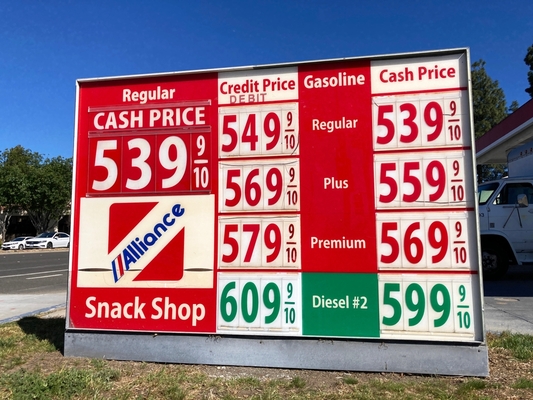 With gas prices soaring across the country, three Democrats in Congress are proposing a national payout program for the remainder of the year to help those struggling to fill up the tank.

The Gas Rebate Act of 2022 would give drivers a $100 energy rebate per month as long as the national average price of gas remains above $4 per gallon. To qualify for the rebate program, drivers must earn a salary under $75,000 and under $150,000 for joint tax filers.

After passing trillion-dollar bills in Congress and giving Americans stimulus checks to sit at home, these politicians actually think putting more money into our pockets will solve the inflation problem that has taken hold of all aspects of the consumer market.

The national debt currently stands at $30 trillion dollars, and at this point, it has become obvious that our politicians have no intention of ever paying back our dues. So instead, big-government politicians are back to advocating for more spending so that voters feel a sense of false security from a few extra paychecks from the government.

“Americans are feeling the impact at the pump of Vladimir Putin’s illegal invasion of Ukraine, and right now, we must work together on commonsense policy solutions to ease the financial burden that my constituents are feeling,” said California Rep. Mike Thompson, the bill’s sponsor.

The national average price of gas is currently $4.24, nearly a 100 percent increase from before Biden took office. Still, Democrats are trying to distort our reality and make people believe that prices are high because of Putin.

Even a quick Google search for why gas prices are so high conveniently takes the Biden administration's approach of blaming the Russian invasion of Ukraine. However, our wallets were hit hard by rising gas prices long before the conflicts abroad began.

If it weren’t for the cash payments that began during the COVID era, would our government be proposing such programs for Americans to fall back on? Probably not. But it’s now an easy solution to keep the people content and voting blue all while the value of the dollar and our economy both decline as a result of reckless spending.

This is how the federal government grows. Politicians use a crisis to institute new "social welfare" programs, and then those programs become the status quo. Now, they're trying to make Americans accustomed to direct cash payments for virtually all income levels.

They're trying to make us trust "the system," even though that system is what made this mess in the first place. That’s not the way the U.S. was designed, and it’s not the way individuals are designed to live.

Freedom and independence come with less government, and a Convention of States can restore this lifestyle. Article V in our Constitution gives us the opportunity to stop the federal government from recklessly spending and growing too big.

Calling a Convention puts the power in the states’ hands to come up with solutions to an overreaching federal government. Amendments proposed at a Convention of States will strip power from the feds and return it where it belongs: with the states and the people.

Show your support for a Convention of States by signing the petition below!

Silence Dogood, who writes under Benjamin Franklin's famous pseudonym, is an intern with the Convention of States Project.