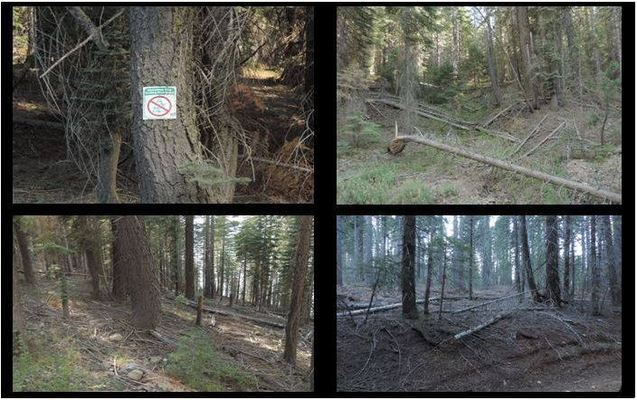 Recently, I had the opportunity to escape my regular day-to-day activities of life in my small farming community in Northern California to head for the hills.

Every year about this time, you can find a number of people doing the same thing. But this is also fire season, and so those escaping the humdrum of everyday life for the beautiful outdoors need to exercise caution.

It was well after dark when I arrived at the La Porte cabin of a friend who was gracious enough to put me up for the night before the big opening day of deer season. After I got settled in, we walked out on the deck and I couldn’t help but notice how wet everything seemed to be.

That’s when I was shown the snow that had recently slid off the A-frame roof and was still stacked up against the side of the cabin.

That morning before sunup, I made it to my perch after a difficult hike. In the dark, without a flashlight, making my way to my intended destination, my chosen route was unusually obstructed by debris. Had it been that long since I was last here that my usual route had changed that much? The short answer was yes, as dawn and sunup would reveal.

Everywhere I looked, all I saw was dead fallen trees and branches blanketing the forest floor. Some portions of the forest were better than others, but not by much. No wonder the firefighters were having an increasingly difficult time every year containing our almost routine forest fires. It made me wonder what the forest service actually did to service the forest. Another obvious short answer was nothing, except tell you not to remove the wood that littered the forest floor.

Every year the California mountains burn the horizon at one end of the state or the other. And more often than not, there is more than one fire burning in our state at a time. This strains the efforts of our brave firefighters and puts their lives at risk.

One option is to open up the forest for people to come and get firewood for the winter. So as long as people were only cutting up what was dead and already fallen to the ground, it would benefit the people, prevent forest fires from happening, and fires wouldn’t burn so quickly or nearly as hot, allowing firefighters the chance to contain future fires more rapidly.

Only you can prevent forest fires! You, the people of California, do you think Washington cares that our forests are burning, and homes are being lost, and the habit for wildlife destroyed? Do you think they care more than Californians care? Do you really think we are not educated enough to take care of our state? It’s obvious to me that they are not educated enough to make decisions for us.

An Article V Convention Of States can fix that. It can put the power back in your hands so you can prevent forest fires. Washington, D.C., won’t have the power to watch California burn. We are the Golden State, but not because of the hue from our raging fires. Tell Washington elitists they are fired! California wants control of California.

Sign the petition. Get involved. Be part of the rescue of our state.