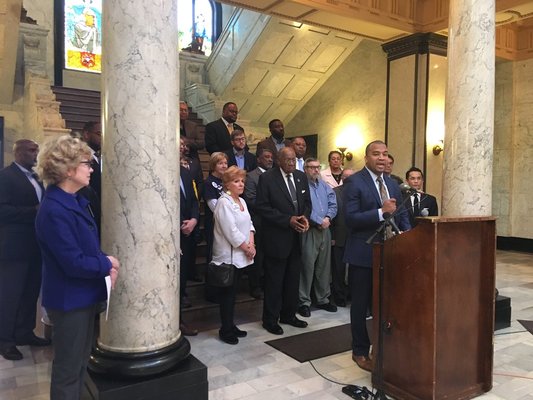 The following was written by Convention of States Action President Mark Meckler and originally appeared on SelfGovern.com.

The Southern Poverty Law Center recently urged Mississippi lawmakers to reject the Convention of the States application, through their attorney attorney Jody Owens.

Southern Poverty Law Center attorney Jody Owens urges lawmakers to reject a proposal for #Mississippi to endorse a Convention of the States to revise the the U.S. Constitution. #msleg pic.twitter.com/ALBMc1FvHA

For those of you who haven’t been paying attention the SPLC is a far left organization that — mysteriously — journalists look to for advice on who is (and is not) “good cultural company.”

In other words, they are always busy policing other organizations and mislabeling them as “hate groups.” (Especially conservative organizations.) And now, apparently, the Convention of States is on their radar.  We’re not alone.

National Review has the details on other organizations they dislike:

The SPLC, as readers may know, has lately busied itself with greatly expanding its definitions of hate groups and extremists. It recently paid a $3.4 million settlement and issued a formal apology for labeling British Muslim Maajid Nawaz an “anti-Muslim extremist.” It was forced to apologize for posting an “extremist file” on Dr. Ben Carson. It calls AEI’s Charles Murray a “white nationalist” and (like it did with Nawaz) has branded Ayaan Hirsi Ali — a former Muslim who fled terrible oppression in Somalia and even now faces jihadist threats on her life — an “anti-Muslim extremist.” It unconscionably calls my former employer, the Alliance Defending Freedom, “an anti-LGBT hate group.”

But the story does not end there.  On March 14, the SPLC fired its co-founder Morris Dees for “inappropriate” conduct. Though the details are few, the SPLC hired an outside firm to evaluate the culture of their organization.  The Los Angeles Times has more:

The Times has also learned that the organization, whose leadership is predominantly white, has been wrestling with complaints of workplace mistreatment of women and people of color. It was not immediately clear whether those issues were connected to the firing of Dees, who is 82.

A letter signed by about two dozen employees — and sent to management and the board of directors before news broke of Dees’ firing — said they were concerned that internal “allegations of mistreatment, sexual harassment, gender discrimination, and racism threaten the moral authority of this organization and our integrity along with it.”

I guess a normal person might be shocked that the SPLC itself might be a hate-filled group, but they’ve been hatefully mislabeling conservative groups based on mere ideology for years.  Though I hate that this co-founder has allegedly been mis-treating others, I hope this organization ceases to be a respected source for any journalist.

Plus, sometimes you can tell a lot about an organization based on who they condemn.  I’m happy that we’re on the wrong side of the SPLC.  May all Americans unite against their hatred.

Want to join the fight? Sign the Convention of States Petition below!