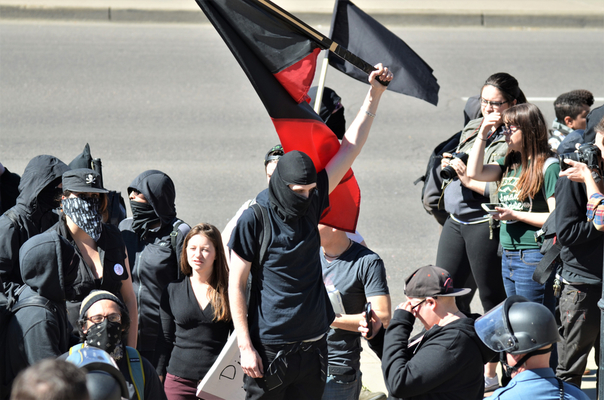 What started as a Twitter rumor has been confirmed: anarchists and hard-Left secessionists have taken control of six square blocks in downtown Seattle.

After police fought with the rioters for days, the "leaders" in the city's government surrendered. They allowed the rioters to set up their own "autonomous zone," and now no city official or law enforcement officer is being allowed past the barrier.

As Christopher F. Rufo describes the event for City Journal:

Officers and National Guardsmen emptied out the facility, boarded it up, and retreated. Immediately afterward, Black Lives Matter protesters, Antifa black shirts, and armed members of the hard-Left John Brown Gun Club seized control of the neighborhood, moved the barricades into a defensive position, and declared it the Capitol Hill Autonomous Zone—even putting up a cardboard sign at the barricades declaring “you are now leaving the USA.”

The anarchists have (ironically) set up their own form of quasi-government, complete with law enforcement who threaten with violence protesters who step out of line.

The incident represents perhaps one of the worst failures of local government in recent history. But some are celebrating the anarchy in Seattle and billing it as a kind of people's revolt.

Streets surrounding the #EastPrecinct- now known by protesters as the Capitol Hill Free Zone - are free of cars and police. Stands with food and medical aid are on every corner, along with tents for protesters who spend the night. #CapitolHill #Seattleprotest #Seattle pic.twitter.com/Hq4EdtTdPM

There's just one problem, of course: the people who live in the newly minted autonomous zone didn't vote for their new "leaders." Even if we could imagine a separate state being established inside the United States, this anarchist paradise doesn't even live up to its people-first ideals.

As Rufo puts it:

The Capitol Hill Autonomous Zone is an occupation and taking of hostages: none of the neighborhood’s residents voted for Antifa as their representative government. Rather than enforce the law, Seattle’s progressive political class capitulated to the mob and will likely make massive concessions over the next few months. This will embolden the Antifa coalition—and further undermine the rule of law in American cities.

What's happening in Seattle isn't self-governance. It's tyranny. A self-governing, liberty-loving people works to change the laws while operating within a representative system. They don't throw off law and order -- they change the laws peacefully and legally.

That's why millions of self-governing citizens have joined the Article V Convention of States movement. A Convention of States works within the constitutional framework set up by the founders. It can have a profound impact on our system of government, but only via the consent of We the People.

Article V allows the people -- acting through the states -- to call a Convention of States for the purpose of proposing constitutional amendments. Thirty-four states must call for such a convention before it can be convened.

This process was established by our founders to correct problems within the federal government, and to do so safely, effectively, and legally.

Any change in our country requires the consent of We the People -- not a few dozen anarchists and petty tyrants. If you want to be a part of a real movement that can limit the power of the federal government, force Congress to be fiscally responsible, and mandate term limits for federal officials, sign the petition below!