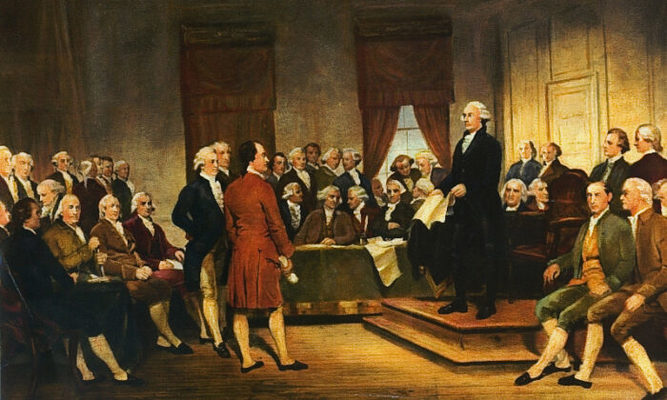 One common argument against calling a Convention of States is that the constitutional convention in 1787 "ran away." George Washington and James Madison were only allowed to "amend" the Articles of Confederation, this theory goes, and delegates to an Article V amendments convention will similarly write an entirely new document.

A Convention of States is not a constitutional convention, of course, because it operates under Article V and not under the residual sovereignty of the states. But even if we disregard this, the historical record totally exonerates our Founding Fathers.

Here's the truth: the Framers did not illegally propose and adopt the Constitution because their instructions from their various states allowed them to propose an entirely new Constitution.

In his latest article in the Epoch Times, Prof. Rob Natelson breaks down the most current evidence about the constitutional convention to totally disprove the "run away" convention myth.

"The claim that the Constitution was a 'coup' is a slander against the framers," he concludes. "The vast majority of convention delegates had full authority to act as they did. And of the small minority who did not, most did not sign the Constitution."

Virginia, for example, gave its delegates the power to propose "all such Alterations and farther Provisions as may be necessary to render the Foederal [sic] Constitution adequate to the Exigencies of the Union," as Prof. Natelson points out:

The following month the Virginia legislature issued a formal convention “call” (invitation) to the other states. Virginia appointed commissioners and granted them powers similar to those the New Jersey legislature granted its commissioners:

“devising and discussing all such Alterations and farther Provisions as may be necessary to render the Foederal [sic] Constitution adequate to the Exigencies of the Union and in reporting such an Act for that purpose to the United States in Congress as when agreed to by them and duly confirmed by the several States will effectually provide for the same.”

Note that the phrase “Foederal constitution” means, in accordance with then-prevailing usage, the entire political system. It does not refer solely to the Articles of Confederation, as some critics assume.

In short, the Framers had the authority to propose a new Constitution because their power came from the states -- not the national Congress at the time.

By contrast, the power of state delegations to an Article V Convention of States comes from Article V and the resolutions each state passes to call for such a Convention. The Convention of States Resolution, which has passed in 15 states so far, only allows amendments that 1) limit federal power, 2) place fiscal restraints on Congress, and 3) limit the terms of office for federal officials.

The Convention is only allowed to discuss and propose amendments that fall into one of those three categories. Anything else will be ruled out of order and not germane to the subject of the Convention.

The delegates will be legally required to follow these rules because they're operating under the power of Article V, not under their independent power as states. As such, they must adhere to the Convention of States call, and the Convention has zero chance of "running away."

The Convention of States strategy is safe, effective, and legal. It's been endorsed by dozens of the nation's smartest scholars and leaders, and five million Americans have voiced their support.

Will you join them? Sign the Convention of States Petition below!