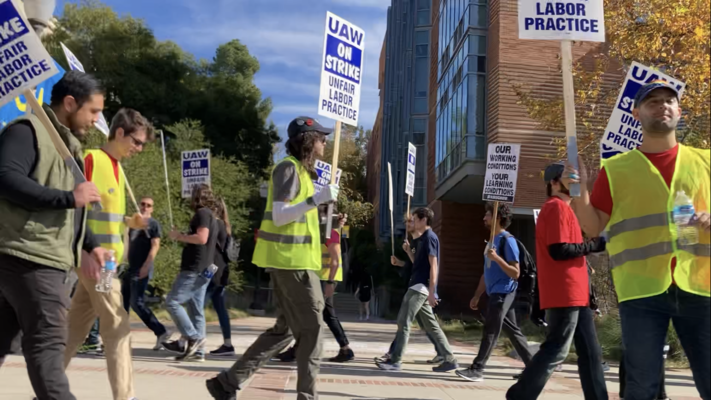 University strikes across California this week demonstrated the deep longing in the heart of man to be spoon-fed and babied by institutions forever.

Upon approaching campus, clanking paint buckets and wheezing kazoos signaled the presence of graduate students on strike nearby.

This strike is the largest academic walkout in higher education in the history of the country, according to The Washington Post.

Among the core demands these 48,000 strikers level against the University of California are a livable wage (which would require the universities to more than double academic workers’ current salary), free public transit passes (a $3.50 roundtrip ticket is just unbearable), and improved campus cycling infrastructure (cars are killing the planet).

Doubtless, these graduate and doctoral students labored tirelessly to get their current positions. It should not come as a shock to this intelligent class, therefore, when the terms of their employment are consistent with the position they signed up for.

All choices in life weigh cost and benefit.

Self-governance requires us to acknowledge our own responsibility in the situations wherein we find ourselves.

However, for this privileged class, they would prefer increased reliance on institutional support.

In a not-so-shocking post, Bernie Sanders announced his “strong solidarity” with the academic workers on his Instagram Tuesday.

At least the strikers have the support of the socialist grandfather they all wish they had.

For all the talk of equity and justice, this strike two weeks out from finals leaves undergraduate students in a lurch, with many of their classes canceled and some sympathetic lecturers holding off teaching scheduled material until the end of the strike.

In an infantile society, whining can get you just about anything.

Anything, that is, except for respect and responsibility.