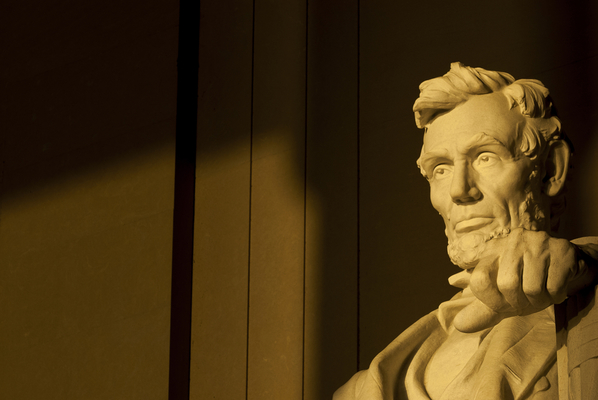 In 1861 when Abraham Lincoln took office, America was being torn apart by factions of people seeking local or narrow interests at the expense not only of social cohesion (fraternity), but also of social cooperation (trade) itself.

Some social coordination is required for any functioning society, and it is best obtained by voluntary cooperation (people freely trading with others), because that is the way learn to get along with one another.

The worst way to achieve the required social coordination is by compulsion or coercion, entailing a loss of the freedom to associate with others as you wish.

When social coordination is "forced" like that, people are driven apart.

This was the social environment when Lincoln gave his Inaugural Address. While Abe Lincoln had some faults and was an imperfect person like every other person in history, not knowing what he didn't know, he also really knew what he did know and was courageous enough to speak truth in a time of societal dysfunction, disarray, and hair-raising strife.

We can learn a lot from him about how a nation heals right when it is at the brink of being literally torn apart by factions of people idolizing their narrow interests and placing them above the timeless principles and values upon which the United States was founded.

So what was his advice? What "medicine" did Abe Lincoln "prescribe" when a nation is so disrupted that it is on the brink of falling apart? The short answer is that he "prescribed" a Convention of States for proposing amendments to the U.S. Constitution.

The longer answer is that he suggested a convention of states as a means of bringing the nation back together, so that we can once again begin to cooperate with one another and, therefore, flourish and thrive with a realistic expectation of progress and betterment, as we rely on timeless principles and a return to virtue to author our very own future on a horizon of hope:

This country, with its institutions, belongs to the people who inhabit it. Whenever they shall grow weary of the existing Government, they can exercise their constitutional right of amending it or their revolutionary right to dismember or overthrow it. I can not be ignorant of the fact that many worthy and patriotic citizens are desirous of having the National Constitution amended.

While I make no recommendation of amendments, I fully recognize the rightful authority of the people over the whole subject, to be exercised in either of the modes prescribed in the instrument itself; and I should, under existing circumstances, favor rather than oppose a fair opportunity being afforded the people to act upon it.

I will venture to add that to me the convention mode seems preferable, in that it allows amendments to originate with the people themselves, instead of only permitting them to take or reject propositions originated by others, not especially chosen for the purpose, and which might not be precisely such as they would wish to either accept or refuse.

As we are once again back into a situation where factions with narrow interests have come to dominate the political spectrum to the point where our very society breaks down or breaks apart, let's follow Abe Lincoln's wise advice and hold a Convention of States for the purpose of restoring a future of freedom, prosperity, and even benevolence.

It means less power for the federal government and more power for the people, which means more personal responsibility for authoring your personal life and for individually developing virtue (like Americans of the past did).

That is precisely the thing which the United States needs right now.