As America approaches her 245th birthday, let’s take a few moments to review one of the most important and innovative concepts of her government -- federalism.

Yes, federalism. If you find yourself dusting off the memories you left back in AP History class, you’re not alone. The discussion of federalism isn’t nearly as fun as running through the Bill of Rights nor as flashy as the Declaration of Independence, and many people forget about this important piece of our design. Federalism is a foundational concept of our government – and understanding it is important for citizens and representatives alike.

What did the Framers of our Constitution intend by including federalism in the design of our government?

The implementation of a national level of government was hotly contested during the design of our country. The Founders needed to work together to create a united country while also preserving freedom of the States and protecting against tyranny. In the end, they used federalism as a structure to help ensure both.

What parts of the Constitution outline federalism?

The Commerce Clause (Article I, section 8) gives Congress the authority “to regulate commerce with foreign Nations, and among the several States, and with Indian Tribes.” This was used to establish the role of the federal government. The 10th Amendment, however, puts the brakes on the federal government by stating “The powers not delegated to the United States by the Constitution, nor prohibited by it to the States, are reserved to the States respectively, or to the people.”

What is the division of power between the National and State levels of government?

The division of power between the two levels of government has changed drastically in the last 80 or so years. From 1788 until the mid-late 1930s, America operated under a design of dual federalism. Often referred to as “layer cake” federalism (for the clear and distinct differences between layers of government), dual federalism had strict separation in the roles of government. Under this form of federalism, the national government was limited to regulating money and certain activities related to commerce, maintaining armed forces and declaring war, international relations and tariffs, and establishing a post office. Everything else fell to the individual States. During this time the reach of the federal government was quite limited and State rights were highly protected. 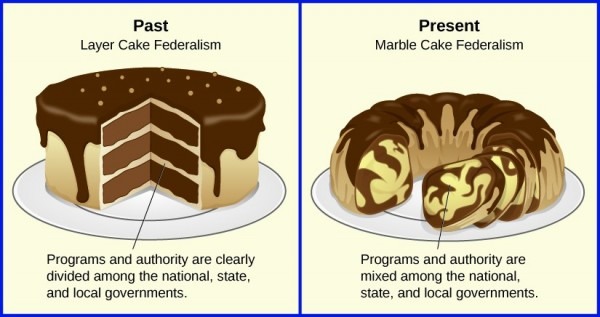 This type of federalism is referred to as “marble cake” federalism because the roles between the forms of government are mixed together and difficult to discern.

New Federalism and a return of State’s rights.

So…what cake are we eating now?

Our current form of federalism can be best described as cooperative federalism with areas of high regulation. Though federal monies are released through both categorical and block grants, Congress will often use coercive regulatory practice to entice States to enact laws pushed at the national level.

In conclusion, the federal government takes roughly three trillion dollars in taxes each year, nearly half of which comes from the 56% of individuals who pay federal tax. This money is used to not only sustain our massive federal government, but to also coerce States into giving into regulatory practice that grows our government further and ultimately removes the rights of the People.

By understanding federalism and the desire the Founder’s had to limit the growth of government, preserve liberty, and protect against tyranny, we can use the provisions outlined in our Constitution to return to a clear and honest division of power, respecting the sovereignty of the States.

Congress will never restore our government to the principles of federalism, but a Convention of States can do it for them. Click here to learn more or sign the petition below!

Nichole Weakley is the State Content Writer for Convention of States Maryland.