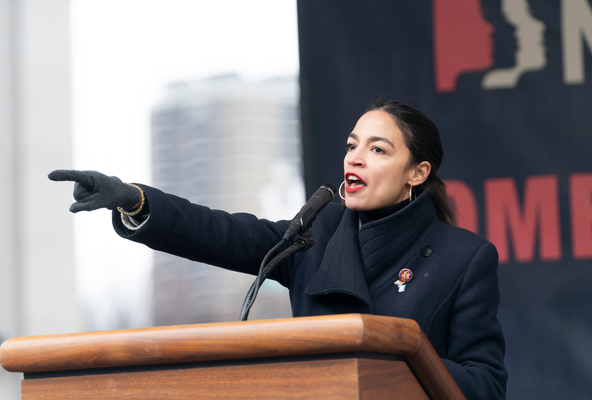 Congresswoman Alexandria Ocasio-Cortez has pushed some strange ideas in the past, but this one takes the cake.

In a bizarre series of tweets, Ocasio-Cortez claimed that Republicans would "eject" Jesus Christ from the chamber and "malign him as a radical."

She followed that with a second tweet pushing her socialist agenda disguised as Christian virtue.

"When politicians use faith as an excuse to pass and uphold laws that seize control of people’s bodies but not guarantee them healthcare, feed the poor, shelter the homeless, or welcome the stranger, you have to wonder if it’s really about faith at all," she said.

Sick and tired of Republicans who co-opt faith as an excuse to advance bigotry and barbarism.

Fact is, if today Christ himself came to the floor of Congress and repeated his teachings, many would malign him as a radical and eject him from the chamber. https://t.co/y19PBDw5co

When politicians use faith as an excuse to pass and uphold laws that seize control of people’s bodies but not guarantee them healthcare, feed the poor, shelter the homeless, or welcome the stranger, you have to wonder if it’s really about faith at all.

The Daily Wire points out that 99 percent of the Republicans in Congress identify as Christian, so it's unlikely they would expel Christ from Congress no matter what ideas he promoted.

While it's true that Jesus encouraged his followers to care for the orphans and widows and the poor, he nowhere mentions in Scripture that the government should provide any of these things. The early church shared everything they had with one another, but they weren't forced to do so by big government. They sold their possessions and gave the money to the poor because they made that decision of their own free will.

For Ocasio-Cortez, these actions should be compelled by the government. Rather than promote true virtue -- choosing to treat others as better than ourselves -- these socialist policies would promote the opposite. They would remove our ability to choose to do the right thing and replace virtue with government-compelled redistribution.

Unfortunately, many Americans seem to have been fooled by these lies about socialism. They want to help those less fortunate, and they've been tricked into signing on to the socialist agenda.

That's why we must construct a firewall against socialism before it's too late. Right now, with a majority in Congress and the White House, politicians like Ocasio-Cortez could move forward with their big-government agenda.

Rather than rely on maintaining a majority year after year, we need a permanent solution. We need constitutional amendments proposed by a Convention of States.

A Convention of States is called by the states under Article V of the Constitution and has the power to propose constitutional amendments that effectively and permanently limit the power, scope, and jurisdiction of the federal government. These amendments can prohibit socialist policies by keeping the federal government in its constitutional box. They won't be able to legislate on any topic not expressly mentioned in the Constitution, leaving policies like healthcare and welfare up to the states.

Millions of Americans have voiced their support, and 15 of the necessary 34 states are on board. To join the movement, sign the petition below!