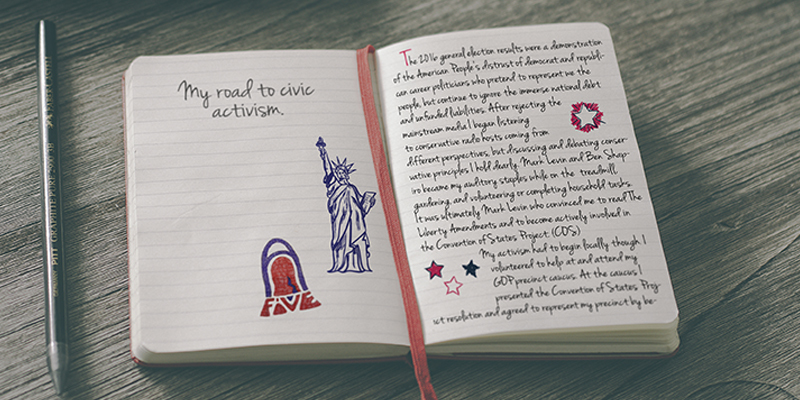 The following was written by Nina Fertey, District Captain for COS Minnesota.

The 2016 general election results were a demonstration of the American People’s distrust of Democrat and Republican career politicians who pretend to represent we the people, but continue to ignore the immense national debt and unfunded liabilities.

After rejecting the mainstream media, I began listening to conservative radio hosts coming from different perspectives but discussing and debating conservative principles I hold dearly. Mark Levin and Ben Shapiro became my auditory staples while on the  treadmill, gardening, volunteering, and completing household tasks.

It was ultimately Mark Levin who convinced me to read The Liberty Amendments and to become actively involved in Convention of States.

My activism had to begin locally though. I volunteered to help and attend my GOP precinct caucus. At the caucus I presented the Convention of States resolution and agreed to represent my precinct by becoming a precinct chair and a delegate to participate at the upcoming senate district convention, better known as my BPOU, basic political organizational unit.

Precinct chairs were asked to participate on one or more of seven committees in order to prepare for the pending convention. I chose to work on the rules committee but more importantly on the resolutions committee too, with the intention of learning the process of resolution presentation to the path of resolution passing at the house and senate levels.

I volunteered to chair the committee and with the help of five other committee members, narrowed down the 27 resolutions presented at the precinct caucus to eleven, weeding out duplicate resolutions or resolutions already part of the GOP platform.

Happily, The COS resolution would be one of the eleven presented and voted on at the Senate district convention! 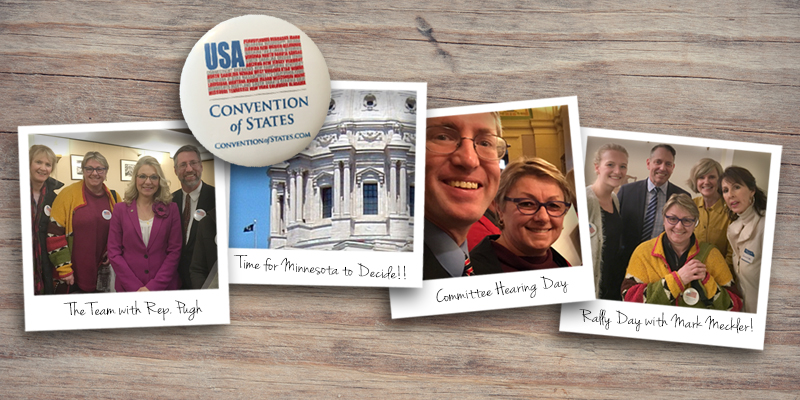 Right around the time I became part of the local boots on the ground, I began volunteering with COS Minnesota. The State Director, Jackie Burns, asked me to participate at Capitol Days where COS volunteers would be present at House and Senate committee hearings, specifically in the committees that could be voting on the COS application eventually.

Jackie introduced me to many COS activists who have become my friends and have led a successful COS rally in the rotunda of the Minnesota state capitol just a few weeks ago. I am inspired by COS leaders like Mark Meckler and supporters like Pete Hegseth, who were part of the rally, but even more so by the everyday people who push COS forward.

The importance of an amendments convention cannot be overstated.

Career partisan politics does not only exist at the federal level. I have witnessed political maneuvering at the grassroots level too. I have been fortunate, though, to meet principled grassroots activists, new and experienced, who have mentored me and helped me make fair choices with regard to the delegate selection process.

There are, believe it or not, career delegates who band together to go to their district and state conventions. Some haven't done any work needed to hold the convention at all. I know this is politics as usual, but to someone like me it can be very disillusioning.

I participated in my first senate district convention in March. I was selected to be a delegate to go to the congressional district and state conventions, but more importantly the COS resolution passed and will move forward.

The importance of an amendments convention cannot be overstated. There are elements at all levels that do not want it to move forward. I witnessed conservatives misinform and fear-monger at the convention and shut down discussion using Robert’s rules. It was done by the book, but it was maneuvering just the same.

Article V is that beacon and was intended for use in times like these.

Become involved with Convention of States, where your voice will be heard and your talent will be utilized to finally rein in D.C.

Find out the many ways you can help, take action today!