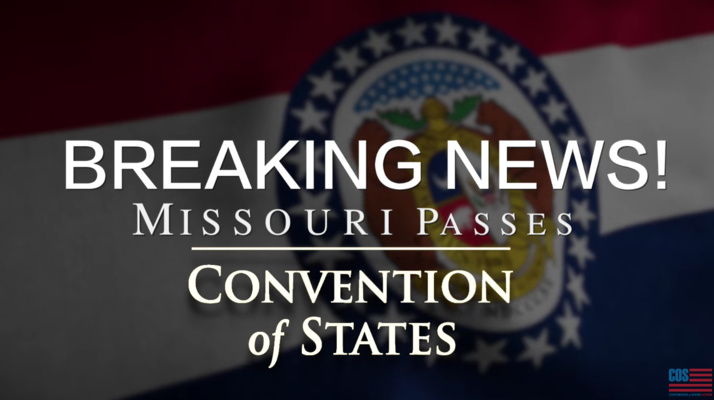 The Convention of States Project is proud to announce that Missouri becomes the 12th state to pass the identical Article V resolution.

The COS Resolution, SCR4 passed on May 12th in the Missouri House under the leadership of Senator Mike Kehoe (SD-06), with House carrier, Representative Keith Frederick (HD-121), by a vote 85 to 50. State legislators see the federal government has no desire to fix itself, regardless of the intentions of a new president and new party in leadership. Citizens realize it is our sovereign duty to protect this nation and the Constitution gives us a way to do just that.

SCR4 calls for an Article V Convention of States for the purpose of proposing constitutional amendments that limit the power and jurisdiction of the federal government, impose fiscal restraints, and set term limits for federal official, such as judges.

“Many Missourians, including a clear majority of the members in the Missouri House and Senate, have concluded that we as citizens must act now to save ourselves from a federal government that has grown far beyond its Constitutional limits,” said Keith Carmichael, State Director for COS Project Missouri. “It is past time for the states to come together as Article V of our Constitution provides in order to propose solutions in the form of amendments. We must quickly come to grips with the real crisis we have created—a ‘house of cards’ we call the national debt and the immorality of forcing it upon future generations—plus interest! We should honor our Founders, who gave us Article V and expected us to use it. Article V is a remedy—a rudder that needs to be used now to steer America back on course. It is in the Constitution for this exact time.”