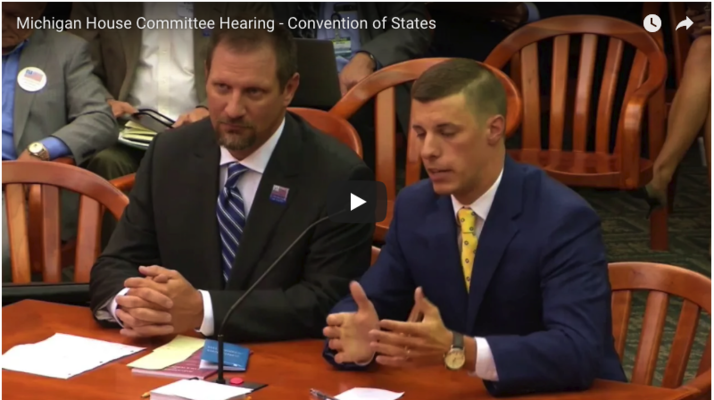 As America sinks deeper into debt and federal abuses pile higher, many Americans are looking for solutions outside of Washington that will permanently “drain the swamp.”

Lansing, MI, Sept. 13, 2017 –The Convention of States Project is pleased that the Michigan House Government Operations Committee passed the resolution, HJR V, out of committee today. Committee Chairman, Rep. Lee Chatfield, is the House sponsor of HJR V. The COS resolution has now been reported out to the House Floor with anticipation of a full House vote coming soon.

Now is the time to act!  Please call YOUR State Representative now, and express your desire for him/her to co-sponsor HJR V (Chatfield's Convention of States Resolution).  Find your State Representative by clicking the button below, and make sure you SIGN the petition there too!

Watch the entire proceedings below.

Article V of the Constitution was unanimously included on September 15, 1787, which gives power to the states through their legislatures to convene and propose amendments. Today, more than 400 Article V applications have been submitted, but no group has ever taken the same approach as the Convention of States Project with a uniform, identical resolution that calls for fiscal restraint, limiting the size, scope and jurisdiction of the federal government and term limits on federal officials such as judges.

Americans are joining the Convention of States movement in staggering numbers due to the dramatic expansion of federal power and the administrative state. The people and states want their power back and see Article V as the logical answer to restoring federalism.

State legislators see that Article V is the only legitimate, legal and constitutional opportunity to enable states to convene and propose amendments that could stop wasteful federal spending, eliminate the IRS, pass term limits for Congress, federal bureaucrats and judges, and take power away from DC that it never should have had in the first place.