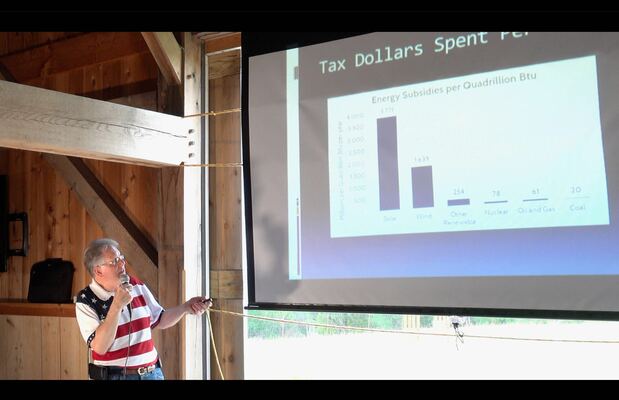 Mike Thompson spent 40 years on television and radio delivering his forecasts of mid-west weather. He is a real meteorologist. Since retiring from his award-winning broadcast career, he was elected to the Kansas Senate where he is the Chairman of the Utilities Committee.

The Kansas Convention of States team invited meteorologist Mike Thompson to address climate change as it is being used by the government to fundamentally transform our lives by using every means available to reduce the use of fossil fuels and replace reliable sources of energy with so-called "green" wind and solar energy.

Utilities are forced to retire base-load fossil fuel and nuclear power plants while still having to backup the unreliable and fragile wind farms with reliable capacity.

An overflow crowd gathered in the shade of a Kansas barn on a late-spring evening to take in Mike's informed perspective on this issue affecting all Americans.

We must challenge the idea of climate change as justification to end use of reliable energy sources exchanged for wind power. Encourage your elected representatives to push back against the corporate welfare funded by ratepayers and taxpayers.

Get informed on the issues. Stay engaged. Join Convention of States Action.