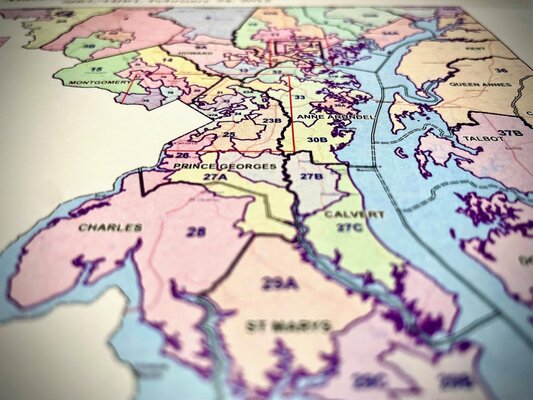 The Maryland Citizens Redistricting Commission (MCRC), a first of its kind in Maryland, is charged with revising the congressional and legislative district lines in a fair and impartial manner.

This process is time sensitive if you plan to offer your comments
This is self-governance in action.

Public hearings are ongoing every Wednesday through November. Members of the public may testify virtually or submit written comments regarding modifications, suggestions, and edits to the Commission's maps.

The commissioners are solidifying their positions as we write this message. They wrap up in November, and their redistricting plan is due to the Maryland General Assembly on January 12, 2022.

Please share your views with the commission on such thorny issues as whether self-governance is best served through one-constituent-one-delegate apportionment or through multi-delegate districts.

On Tuesday, January 12, 2021 Governor Larry Hogan of Maryland held a press conference regarding the pending 2020 Census report which results in congressional redistricting.

“Nowhere has gerrymandering been allowed to run more rampant than here in the state of Maryland where decades of unfair redistricting and drawing of legislative and congressional districts have made a mockery of the electoral system.”

At the press conference, Hogan announced the creation of the Maryland Citizens Redistricting Commission. The outcome will ultimately have an impact on elections in Maryland.

The term redistricting is used to define the process during by which new congressional and state legislative district boundaries are drawn. These boundary lines are redrawn every 10 years after the completion of the United States Census. Over the past decade, some areas have gained population, and some areas have lost population.

The Census provides data that shows in detail how many people reside in each specific area of the state. Further, these population figures allow for the state to determine how many people should be part of each congressional and legislative district with each containing nearly the same population.

Reapportionment is the process by which each state is allotted a number of representatives in the House of Representatives based on the population of the state. Maryland currently has eight congressional districts, and this number is not expected to change based on population projections completed before the Census.

Remember that public hearings will continue every Wednesday through November.  This is your chance to participate in self-governance.

Voting districts matter -- that's why gerrymandering happens in the first place. Voting is the ultimate expression of self-governance. There are some things good citizens do because it is our duty, as citizens, to do them. But in America, good citizenship also requires we use the constitutional tools available to us to make necessary course corrections when our government goes astray.

We can call a Convention of States to bring power back to the states and to We the people, where it belongs. In using Article V of the Constitution, We the People, acting through our state legislatures, can propose amendments that will rein in federal overreach, put fiscal restraints on spending, and place term limits on federal officials.

If you have not yet signed the COS petition, or you’re not sure if you have, visit conventionofstates.com and sign it today. Then, consider participating in the work of the Maryland Citizens Redistricting Commission (MCRC).