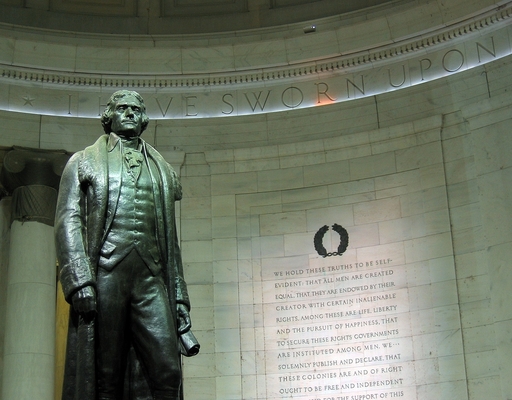 While watching a Kansas representative (Rep. Michael Murphy) give COS testimony on the House floor, I was delighted to discover that Thomas Jefferson advocated specifically for a Convention of States.

At least five of the best U.S. presidents advocated for a Convention of States, and the first one did so even before he became our first president. In a November 1787 letter to his nephew, Bushrod, George Washington wrote this:

The warmest friends to and the best supporters of the Constitution, do not contend that it is free from imperfections; but these were not to be avoided, and they are convinced if evils are likely to flow from them, that the remedy must come thereafter; because, in the present moment it is not to be obtained.

And as there is a Constitutional door open for it, I think the people (for it is with them to judge) can, as they will have the aid of experience on their side, decide with as much propriety on the alterations and amendments wch shall be found necessary, as ourselves; for I do not conceive that we are more inspired—have more wisdem—or possess more virtue than those who will come after us.

The power under the Constitution will always be with the people.

When George Washington mentions the "Constitutional door" open for regular people to devise and propose "amendments wch shall be found necessary" -- he was referring to an Article V convention for proposing constitutional amendments.

In short, George Washington was advocating for the future use of Article V even before the U.S. Constitution had become ratified -- even while the ink it was written in was still drying. It is fitting that our first-ever president was advocating for Article V from the very beginning of our great nation.

Here are five great U.S. presidents who advocated specifically for a Convention of States:

In each of these five documents above, you will find that it is not just the amending of the U.S. Constitution which was advocated by these great men, but the amending of it by the specific means of an Article V amendments convention.

Let's look into the 1823 letter from Thomas Jefferson to William Johnson, pulling quotes out for comment.

... the original objects of the Federalists were 1. to warp our government more to the form and principles of monarchy, & 2. to weaken the barriers of the state governments as co-ordinate powers. in the first they have been so compleaty foiled, by the universal spirit of the nation, that they have abandoned the enterprise, ... are now aiming at their second object ...

Jefferson is telling Johnson that advocates for big government tried to steer the U.S. toward a super-concentration of centralized power: monarchy. But then goes on to say how they changed goals from building up central power to tearing down the power of the individual states, themselves -- making U.S. states weak and feckless.

You request me confidentially to examine the question—Whether the Supreme court has advanced beyond it’s constitutional limits, and trespassed on those of the State authorities?

Jefferson goes on to mention two cases in which the U.S. Supreme Court overstepped its bounds: Marbury v. Madison (1803) and Cohens v. Virginia (1821).

In the Marbury case, Chief Justice John Marshall gave an opinion that the Supreme Court is the sole and final arbiter of whether an act is constitutional.

The issue revolved around whether the Supreme Court could force the hand of Secretary of State James Madison -- giving him a written mandate to deliver judicial appointments (commissions) which the previous president, John Adams, had literally just made on his way out of office.

He went on in his opinion to insinuate that 9 people in fancy black robes (his Supreme Court) will be the only ones to finally decide if and when something is ever constitutional.

Jefferson lamented at how this personal "opinion" of the Chief Justice then took on a life of its own, as if it had actually been made into a brand-new law:

... when I countermanded them there was as yet no Secretary of state. yet this case of Marbury and Madison is continually cited by bench and bar, as if it were settled law, without any animadversion on it’s being merely an obiter dissertation of the Chief Justice.

Jefferson also talked about an 1821 case regarding two brothers who bought District of Columbia lottery tickets, only to bring them back to Virginia to scalp them there -- which was against Virginia state law.

Not only had Marshall opined that he and 8 others will get the final say over the constitutionality of all federal government actions, but he went on in Cohens v. Virginia to opine that he and 8 others will have the final say even over the findings and rulings found in state supreme courts -- i.e., that even their rulings are subject to review by the U.S. Supreme Court.

... the states supposed that by their 10th amendment, they had secured themselves against constructive powers. they were not lessoned yet by Cohen’s case, nor aware of the slipperiness of the Eels of the law.

Jefferson uses the slipperiness of an eel to make an analogy to how the U.S. Supreme Court was even finding ways around the 10th Amendment, the one meant specifically to keep the federal government out of state business -- the one emphasizing that states remain sovereign over their own domestic matters, such as whether someone broke state law.

1. the capital and leading object of the Constitution was to leave with the states all authorities which respected their own citizens only, and to transfer to the US. those which respected citizens of foreign or other states: to make us several as to ourselves, but one as to all others.

This first one is an echo of the 10th Amendment, where domestically, each state is a sovereign unto itself, though the states would still look to the federal government for the conduct of foreign affairs on the world stage -- speaking in one voice to foreign nations.

2. on every question of construction, carry ourselves back to the time when the Constitution was adopted, recollect the spirit manifested in the debates, and instead of trying what meaning may be squeezed out of the text, or invented against it, conform to the probable one in which it was past.

This second guideline is the principle of originalism. The principle that, what the U.S. Constitution means today, is precisely what it had meant in the past when it was originally formed. While the exact use of language can change over time, the original intent of the founders is a permanent bedrock.

Jefferson then applies the two guidelines to the Cohens case:

... let us try Cohen’s case by these Canons only ... 1. it was between a citizen and his own state; and under a law of his state. it was a domestic case therefore; and not a foreign one.

2. can it be believed that under the jealousies prevailing against the powers of the General government, at the adoption of the constitution, the states meant to surrender the authority of preserving order enforcing moral duties, and restraining vice within their own territory? & this is the present case, that of Cohen being under the antient and general law against gaming? can any good be effected by taking from the states the moral rule of their citizens, and subordinating it to the general authority ...

Then Jefferson emphasizes how it is that all law should be simple rather than complex, short rather than long*:

... laws are made for men of ordinary understanding, and should therfore be construed by the ordinary rules of common sense. their meaning is not to be sought for in metaphysical subtleties, which may make any thing mean every thing or nothing; at pleasure.

*Note how this would make our longest and most-complex laws -- i.e., those laws such as the Affordable Care Act, with more words in them than is even found in the New Testament! -- all essentially null and void, because they were most definitely NOT made for "men of ordinary understanding."

And then Jefferson reaches the conclusion that knocked my socks off the first time I read it:

But the Chief Justice says ‘there must be an ultimate Arbiter some where.’ true, there must: but does that prove it is either party? the ultimate arbiter is the people of the Union, assembled by their deputies in Convention, at the call of Congress, or of two thirds of the states. let them decide to which they meant to give an authority claimed by two of their organs. and it has been the peculiar wisdom & felicity of our constitution, to have provided this peaceable appeal where that of other nation is at once to force.

What Jefferson is saying here is that there really is a final and ultimate arbiter of truth and justice in America, and it is not 9 people dressed in fancy black robes.

Other nations must all resort to force in order to topple their own tyrannical leaders, but the United States alone has been given a means for a "revolution without the bullets."

We are the one place in the entire world where all disputes can be settled by talking, rather than by fighting -- and that's pretty exceptional.