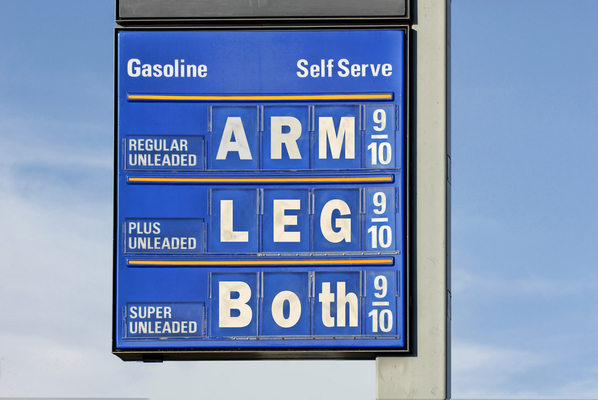 Amid painfully high gas prices across the nation, Biden urged Congress on Wednesday to pause the federal gas tax for three months, which would bring gas prices down a whopping 18.4 cents per gallon.

Both Democrats and Republicans have been critical of the proposal because it doesn’t guarantee prices would go down, and it also doesn’t solve the long-term problems of inflation. The idea has been called a cover-up, short-sighted and fiscally irresponsible.

While any decrease in gas prices is an improvement, lifting the gas tax temporarily comes with additional problems: the federal gas tax is what funds federal infrastructure projects across the country.

“A gas-tax holiday would modestly reduce prices at the pump but exacerbate overall inflationary pressures and increase demand for an energy source already short in supply," Maya MacGuineas, president of the Committee for a Responsible Federal Budget (CRFB), said in a statement Tuesday.

A temporary reduction in costs would likely boost demand, possibly leading to shortages with the expectation that it will soon rise again after three short months.

Let’s just take a look at statistics for reference:

According to U.S. Energy Information Administration data, the average driver consumes 656 gallons of gas in a year, which calculates to 54.6 gallons each month. So under this temporary tax, Americans would save about $10 for each month the tax is paused. For the proposed three-month pause, that’s a max savings of about $30 for gas consumers.

Is that really going to get us anywhere in the long run?

Are we supposed to keep relying on the government to save us during every future financial hardship? Because in that case, it would be easier to suspend all sales taxes so we could really utilize the money we earn and spend better.

Obviously that’s not reasonable, but neither are these temporary fixes that really don’t do anything but allow the White House to pretend they are working to create solutions for us.

It’s full of pros and cons, but we also have seen that the more the government gets involved in the free-market economy, the more problems evolve.

Convention of States is here to restore responsible spending to the government. Everyone can see the economic problems facing our nation today, but the people inside our government won’t own up to the issues as a result of their unfathomable spending.

That’s why using Article V of the Constitution, We the People can take back control and put the politicians back in their place. The states can meet to discuss amendments to the Constitution that would enact term limits and responsible budgeting to the federal government, both extremely necessary.

Join the growing movement by signing the Convention of States petition below.