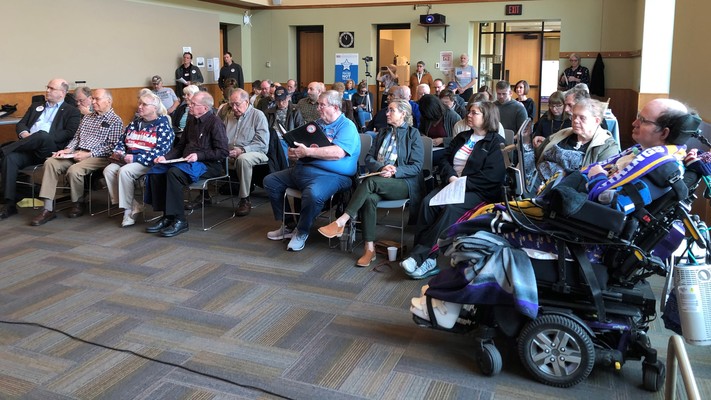 A Convention of States Minnesota town hall was held in Chanhassen on Saturday, November 9, and there were inspiring words from several people.

It seems like the inspirational tone was set as a "Convention of States Explained" video was first presented, which ended with a commentator who said,

"Civilizations rise and fall. Let's be a civilization that saw the cycle of collapse coming and broke it."

As if a valve was opened up, uplifting words from the presenter, an attending state legislator, and the State Director just seemed to keep flowing.

It seemed sort of like a baseball game where the home team kept knocking the ball out of the park. Presenter and Legislative Liaison Steve Davidson was the first up to bat, cracking the ball into the outfield.

"This is our purpose. We need to convince our state legislators to support this and pass the [COS] resolution. By the way, Article V, as it reads today, was passed unanimously by the Founding Fathers. They were all in on it."

After a while, State Senator Scott Jensen (47, R) stood up to the plate, and it was another smash hit

"...if you take any one piece of literature away from this room today, I would recommend you take the one by Mark Levin saying 'Take Your Power Back.' Levin does a powerful job of telling you why it isn't just a convention to talk about a balanced budget, or just about term limits...because that broadens the conversation into a discussion about liberty and, in so doing, it takes us away from the noise. We can't let the noise drown us out. It's about liberty. It's about the Constitution. We need to be the campaign team...right here."

And then Steve was up to bat again, and he let this one fly:

"If we're successful, we have built a coalition of patriots in this country that hasn't been seen for a long, long time...maybe ever. And that will continue to influence decisions in the state legislature...every level of government. People will understand that 'Hey, it does make a difference if I stand up and act.' And the confidence, I think, that will be discovered and grown in this coalition of American patriots will be something to behold. It's so exciting to think about that."

Do words ever get more inspiring than that? That is the kind of talk which can make one's eyes water--and I speak from experience.

Then, State Director Jackie Burns took the microphone to give an update of "COS by the numbers." There are 22,000 petition signers in Minnesota who support the movement, 600 cards mailed out to state legislators, and 1000 phone calls have been made by tireless patriots (our Call Commandos).

Then she brought up the COS Mission Statement and the aspirational goals of the movement, including her favorite ("Inspire a political and spiritual awakening in America").

And then, not to be outdone by the power-hitters who had been up to bat before her, she stepped up to the plate and delivered a grand slam:

"When our Founders tried to break away from the tyranny of the British, there were three groups. One-third of them didn't pay any attention, another third sided with the British, and the other third fought against the largest and most powerful army ever known--and the odds weren't in their favor. So that's why I know this is going to be successful. That's why I know what we're doing makes a difference."

Talk about inspiration! To see the recorded video of the town hall click below.

Our Mission: To build an engaged army of self-governing grassroots activists