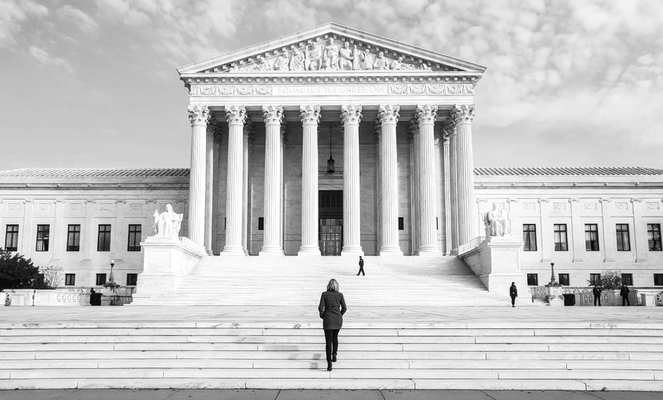 The following was written by Convention of States National Legislative Strategist Rita Dunaway and originally published on WND.com.

“We need more Republicans in 2018 and must ALWAYS hold the Supreme Court!”

This tweet by President Trump naturally ruffled the feathers of liberal pundits, but it points to a particular perversion of our federal system that should be troubling to all of us: a highly politicized and virtually omnipotent judiciary.

The founders expected the judiciary to be the “least dangerous” branch of government; the neutral arbiter of legal questions according to the written laws adopted pursuant to the political process. But today, that would be a poor description of what the court actually does.

Thanks to the idea that we live under an “organic Constitution” whose meaning changes with the times, many federal judges today are not so much neutral arbiters as they are linguistic contortionists, twisting the black-and-white words of our Constitution to accommodate shape-shifting societal values.

In the hands of judges allowed to operate according to this philosophy, the Constitution cannot effectively define or limit government power. As long as we permit judges to reinvent the meaning of the words and phrases that frame our government, the political persuasion of those judges will not only be relevant, but key.

Do they think the Affordable Care Act is a good idea? Then they will just announce that Congress’ taxation power allows it to penalize individuals for not purchasing a qualifying policy. Voila – a precedent declaring Congress to have a power that neither a single Founding Father nor intellectually honest modern-day reader would have ever perceived from constitutional text.

The late Justice Antonin Scalia once lamented, “The Court must be living in another world. Day by day, case by case, it is busy designing a Constitution for a country I do not recognize.” A Court with the power to do this is guaranteed to be a politicized Court, and the government of which it is a part will be one whose boundaries are constantly moving.

If we all agree that this is problematic – if we prefer the rule of law to the rule of judges – then we should unite to restore a judiciary that decides cases on the basis of what is actually written in the law. Where the law is silent, the question is left to the political process.

But how do we get back to this?

The long-term solution is constitutional amendment. Through an amendment, we should instruct the court to strictly construe the enumerated powers of the federal government according to the meaning of the words when written, and that while the people’s liberties should be interpreted broadly, new “rights” may only be codified by legislatures or added pursuant to Article V’s constitutional amendment process; they may not be created by the courts.

The effect of this kind of permanent rule of constitutional interpretation would be not only to restrict the courts to doing what courts were meant to do, but also to put the rest of the federal government back inside its constitutional fences. It would require federal courts to strike down the myriad actions and policies of federal agencies, institutions and officials that are not directly tied to an enumerated federal power as those powers were originally understood.

This, in turn, would restore a robust federal system in which state and local governments – which are much more responsive to the people – determine the vast majority of the laws and policies that govern us.

Despite what some may suggest, interpreting the Constitution strictly according to its original meaning doesn’t relegate us to life with an outdated Constitution. When changes are truly needed, they simply must be made and approved by “we, the people,” according to the process we all agreed upon (in Article V) rather than made by judicial fiat.

This is what it looks like to live under the rule of law.

We have long complained about illegitimate “judicial activism” and the ways it has undermined our self-governance. It is time for the states to use the tool the Constitution provides in Article V to curtail judicial tyranny once and for all.

How a federal judge – and especially a Supreme Court justice – will interpret the supreme law of our land is too significant to be merely a litmus test used by partisan politicians in the appointment process. It should be a black-and-white mandate to the judiciary contained in the Constitution itself.