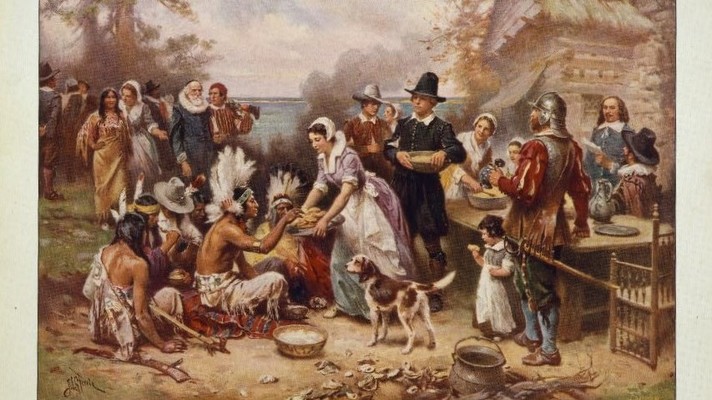 The history of Thanksgiving is often associated with a poem written in the 1800s by Margaret Junkin Preston: "The First Thanksgiving Day" [1], which portrays the Thanksgiving feast/festival of 1621, attended by the Pilgrims and 100 Native Americans.

One historic source of information related to such an event actually comes from a document written in 1630: The Planter's Plea [2] by Reverend John White of Dorchester, England.

Reverend White argued vehemently for an English colony in Massachusetts Bay and makes mention of how the presence of English settlers had interrupted an annual plunder by a tribe to the northeast (by the "Tarentines") of those Native Americans living in the Massachusetts Bay area:

In times past the Tarentines ... inhabiting a soil unfit to produce that Countrey graine, being the more hardy people, were accustomed yearely at harvest to come down in their Canoes, and reape their fields, and carry away their Corne, and destroy their people, which wonderfully weakened, and kept them low in times past: from this evill our neighbourhood hath wholy freed them, and consequently secured their persons and estates; which makes the Natives there so glad of our company.

So, instead of having their yearly harvest plundered by another tribe, they could keep their annual harvest. Therefore, these Massachusetts Bay Indians were thankful for the presence of the English settlers.

The official recognition of Thanksgiving Day, however, begins with a proclamation [3] by President George Washington on October 3, 1789:

Whereas it is the duty of all Nations to acknowledge the providence of Almighty God, to obey his will, to be grateful for his benefits, and humbly to implore his protection and favor—and whereas both Houses of Congress have by their joint Committee requested me “to recommend to the People of the United States a day of public thanksgiving and prayer to be observed by acknowledging with grateful hearts the many signal favors of Almighty God especially by affording them an opportunity peaceably to establish a form of government for their safety and happiness.”

Now therefore I do recommend and assign Thursday the 26th day of November next to be devoted by the People of these States to the service of that great and glorious Being, who is the beneficent Author of all the good that was, that is, or that will be ...

And from that point forward, we've been celebrating Thanksgiving on the last Thursday in November. President Washington knew of the importance of gratitude and of having a humility which recognizes that we are all at the mercy of Providence.

Note also how he focuses and directs the gratitude onto a single object: the opportunity given to us to peaceably establish a form of government which best attains our own safety and happiness.

As we think about Thanksgiving, let's also remember what the Founders such as George Washington were most thankful for: the opportunity to create and to sustain a nation of self-governance, built on the idea of federalism (a federal governance subordinated to local governance in virtually all domestic matters)--the kind best suited for attaining ongoing safety and happiness.

It is as important as ever to remain grateful for the opportunity to regain this "now-lost" form of governance, and we can all thank Colonel George Mason for insisting on including an Article V Convention of States for proposing amendments. We have the opportunity to peaceably re-establish self-governance.

Prior to the 1930s, the federal government was always smaller than the sum of state governments (it spent and regulated less than they did).

That is federalism. To restore a bright future for ourselves and our posterity, we need to return to the federalism of the past.