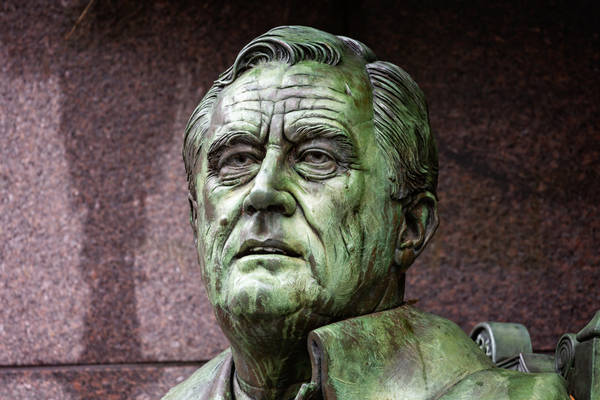 The New Deal of the 1930s is a source of controversy because it fundamentally transformed life in America so that Americans living after the New Deal would live differently than those before.

There was even pushback from the US Supreme Court, which overturned the National Industrial Recovery Act in 1935, on the basis that it created industrial cartels and assigned law-making powers to unelected bureaucrats appointed to the National Recovery Administration.

If you were found to be in compliance with the hundreds of codes created by the unelected bureaucrats, then you could display a Blue Eagle emblem at your place of business [1], showing that you were being loyal to the codes that the bureaucrats had created.

This loyal patronage may then be something that is rewarded with political favoritism, something that FDR was known to engage in [2]. By 1936, much popular opposition had grown up against New Deal policies as the process of picking winners and losers was playing out while the overall economic improvement was, at best, unremarkable.

People may say, "Who cares about this stuff? It's ancient history" but the fact that things haven't improved in 80 years, but have grown even worse now than they were back then, is all the more reason to join our growing, grassroots army of self-governing citizen activists.

A few of examples of how things, politically, are even worse now than they were back then, are that our federal government spends more than twice the share of GDP than theirs did back then, our federal deficits are an even greater share of GDP, and our federal regulations are many times more numerous as theirs were, as well.

Our "Current Deal" is even more extreme (even farther away from the original intent of our founders) than their New Deal ever was.

The 1936 Republican Party Platform, among many other things, is stored in the database at UC Santa Barbara [3], and I've selected 12 of the planks to show how relevant they are to the trials and tribulations which US citizens are going through today, amidst a new crisis which government is seeking to solve by exerting yet more control over the lives of the citizens.

You don't have to be a Republican to oppose government overreach and abuse, but it happened to be the case in the 1930s that the Republicans were getting short-shrift from the FDR administration, and their traditional "small government" stance is likely the main factor involved in that.

Here is the "short list" I compiled from the UC Santa Barbara website entry for the 1936 Republican Party Platform:

3) Appeals to passion and class prejudice have replaced reason and tolerance.

4) There can be no individual liberty without an independent judiciary.

5) We pledge ourselves to the merit system, virtually destroyed by New Deal spoilsmen.

6) Stop the folly of uncontrolled spending. Balance the budget—not by increasing taxes but by cutting expenditures, drastically and immediately.

7) Use the taxing power for raising revenue and not for punitive or political purposes.

8) We advocate a sound currency to be preserved at all hazards.

10) We favor equal opportunity for our colored citizens. We pledge our protection of their economic status and personal safety. We will do our best to further their employment in the gainfully occupied life of America, ... . We condemn the present New Deal policies which would regiment and ultimately eliminate the colored citizen from the country's productive life, and make him solely a ward of the federal government.

11) We are opposed to legislation which discriminates against women in Federal and State employment.

12) We affirm our unalterable conviction that, in the future as in the past, the fate of the nation will depend, not so much on the wisdom and power of government, as on the character and virtue, self-reliance, industry and thrift of the people and on their willingness to meet the responsibilities essential to the preservation of a free society.
--------

As you can see, opposition to the New Deal in 1936 resembles many of the trials we still go through to this very day in dealing with a government which sees itself as the solution to all of our problems -- just like the analogy that everything that a hammer sees is "a nail" (something to be pounded).

The last point listed conveys a hope for America founded upon immutable principles of how humans can do well in their lives. In the current political climate, much of that hope has been lost, but that doesn't mean that a positive and lawful movement of engaged citizens can't bring about a revival.

It is all the more reason to support calling a Convention of States limited to proposing vital amendments so as to shrink the size and scope of federal government, as well as introduce term-limits for Congress and federal officials who have learned to make a career out of wielding the power of the state for their own personal gain and for the gain of crony, special interests.

The founders unanimously agreed to put a clause into Article V of the U.S. Constitution so that We the People, acting through our own state legislatures, could impose limits on federal overreach -- and we need to do that now, more than ever before.