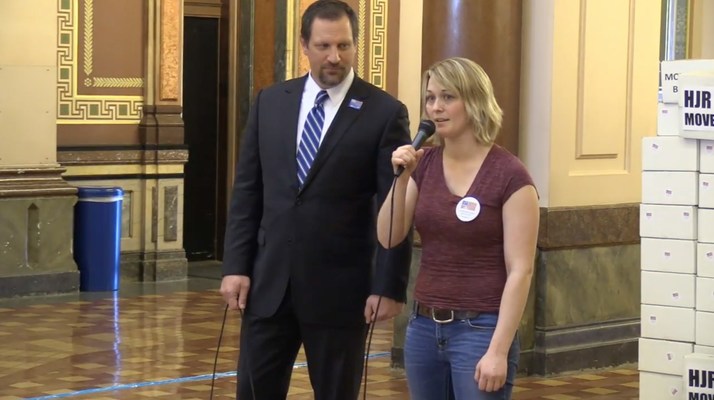 Photo: Sarah Abdouch speaks at a Convention of States rally in 2018.

We've always said that Convention of States volunteers are the best in the nation. They're the most patriotic, dedicated, and energetic Americans in the fight for liberty, and they're willing to give up their time, money, and talents for the cause.

We just received word that one of those patriots, former Iowa State Director Sarah Abdouch, is running for the state legislature in her home state! Sarah is a great example of someone willing to take the next step to serve her community and her country, and she's already getting media attention.

Check out the profile below from Caffeinated Thoughts:

McConkey, first elected in 2014, plans to run for a third term. Abdouch ran in the Republican primary in the district in 2018, but was the runner-up in a three-way race that saw low turnout.

“I am very pleased to have the opportunity to serve the people of Council Bluffs and Carter Lake in Des Moines,” Abdouch said in a released statement. “I am so proud of our area and the growth we’ve seen in recent years and I want to do everything I can to accelerate our success. We need someone in the Iowa House who is of the community, and is willing to listen, learn, and pull together a big picture that we can take action on.”

She said her years of experience in the world of business-to-business sales, and leading an all-volunteer, non-partisan organization, have prepared her well to listen and lead for the people of Council Bluffs and Carter Lake.

Abdouch is the former State Director for the Convention of States Project and is a member of the Republican Central Committee in Pottawattamie County. She also leads a large writing group in Omaha during her spare time, and loves to volunteer in child care at her church. She works full-time as a Technical Consultant with AT&T and holds her Bachelor’s Degree in English from Wheaton College in Illinois.

She intends to focus her campaign on important issues that Iowans care about: Economic development to grow jobs, strong local schools, affordable health care, and ensuring Iowans’ rights and liberties are protected.

“As State Representative, I will work to support Iowa’s job creators, ensure our children receive a world-class education, and ensure families have access to affordable health care. I’m also passionate about tackling the issues of drug abuse and homelessness in our community. These are not issues with easy solutions, but with community input and collaboration at the state and local levels, we can solve these problems together,” Abdouch added.

She also said in her announcement that she will work to reform the tax code and leave more money in the pockets of taxpayers, ensure children and adults are able to seek mental treatment near their families, and improve Iowa’s hunting regulations.

You might not be able to run for public office, but that doesn't mean you can't make a difference in the fight for freedom and self-governance! We need volunteers and leaders in all 50 states, and you can get involved right now by signing the Convention of States Petition below!