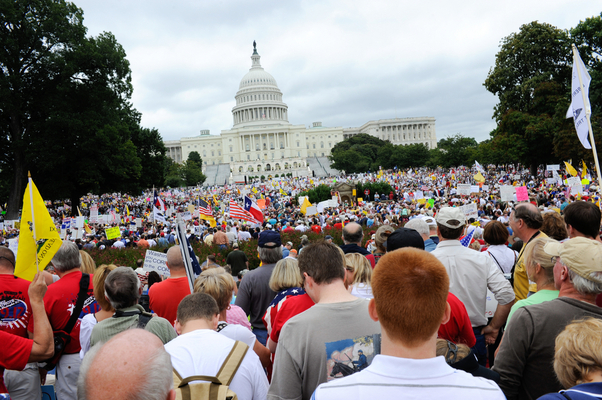 More than 200 years after George Mason’s auspicious addition to Article V was unanimously adopted by the Constitutional Convention, the government under that constitution seemed to be degrading into exactly what Mason feared it would become: “a corrupt, tyrannical aristocracy.”

In 2009, frustration at the federal government’s reckless spending and intrusive policies reached a fever pitch. It seemed new president Barack Obama had no respect for whether his actions as president were constitutional or not, but the problem pre-dated him.

For years, D.C. had shrugged off constitutional limits on its power and jurisdiction, barging into the lives of millions of everyday Americans, imposing burdensome regulations and strict tax codes.

These everyday Americans were ready to make their voices heard, and in February of 2009, they participated in a string of nationwide Tea Party protests.

At one of these events, in Sacramento, California, an attorney, Mark Meckler, attended his first political event, frustrated that no matter who he voted for, “Washington D.C. got bigger and the citizen got smaller.” He found that everyone he spoke to at the protest shared his frustration.

Over the next several months, Meckler became a surprise leader in the growing Tea Party movement. On tax day that year, he joined more than 250,000 people in another nationwide series of grassroots protests which garnered national attention. Clearly, Americans were disillusioned with the federal government, searching for something to do about it. The Tea Party seemed to be the answer.

Then, in 2010, the movement culminated during the midterm elections. Tea Party-affiliated candidates “seized the House majority with bold promises to cut taxes and spending and to roll back what many viewed as Barack Obama’s presidential overreach.” Many Tea Party patriots also won U.S. Senate and gubernatorial races.

According to AP News, it was “the biggest GOP wave since the 1920s.” As The Washington Post noted, “if you measure an election by the length and breadth of its impact, few — if any — can equal the midterm elections of 2010."

But then, despite massive gains in political representation, nothing happened. Nothing changed. Well-intentioned candidates assimilated into a broken system and the federal government continued to grow as if nothing had happened. It left grassroots voters feeling disenfranchised.

Mark Meckler would eventually learn from Micahel Farris (CEO of Alliance Defending Freedom and founder of Patrick Henry College and the Home School Legal Defense Association) that no matter how many good people the Tea Party elected to Congress, they would be ineffectual in a fundamentally broken system. The solution, therefore, was not just to send good people to Washington. The solution was to fix Washington.

Together, Meckler and Farris tapped into the wisdom of George Mason, utilizing Article V’s unused clause to formulate a new and improved plan for reining in the federal government. Washington D.C. would never curb its own power, they realized. If Americans wanted to fundamentally fix a broken structure of governance, they would need a force outside of Washington; they would need a Convention of States.

The launch of the Convention of States movement coincided with the release of Mark Levin’s new book The Liberty Amendments, in which Levin rallied the states to use Article V to fight federal tyranny. Providentially, neither the team behind the rising COS movement nor Levin were aware of the other’s actions until they had already been set in motion.

In the first chapter of his book, which has led countless volunteer leaders to COS over the years, Levin explained his motivation behind supporting Convention of States: “I undertook this project not because I believe the Constitution, as originally structured, is outdated and outmoded, thereby requiring modernization through amendments, but because of the opposite–that is, the necessity and urgency of restoring constitutional republicanism and preserving the civil society from the growing authoritarianism of a federal Leviathan.”

As Levin’s words reveal, the movement to call an Article V Convention has always been about preserving the original intent of the Constitution. COS supporters cherish and respect our founding document, from its opening words to the Second Amendment and beyond. Lived experience reveals, however, that sending politicians who also cherish and respect our Constitution into a system that hates it will never be enough.

We must fix the system, and thanks to George Mason, we have the opportunity to do just that. Sign the Convention of States petition below and join the movement today!