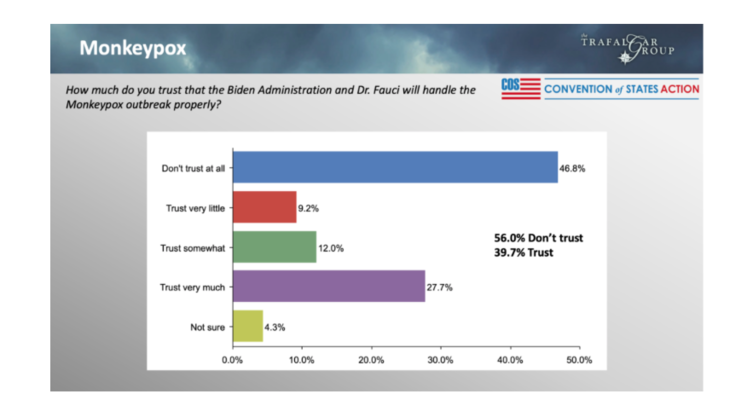 A recent Convention of States Action poll, in partnership with the reputable pollster Trafalgar Group, finds that Americans have little to no trust in Biden and Fauci when it comes to the Monkeypox outbreak.

The CDC bumped its travel alert to a level 2 warning on Monday as the Monkeypox outbreak has supposedly become a greater threat, yet the majority of Americans – 56% of voters – don’t trust the Biden administration to handle the issue correctly.

Only 39.7% said they trust Fauci and Biden to respond properly, proving that Americans simply don’t view the government as a reliable resource when it comes to personal health. The government's response to COVID-19 over the past two years has appeared to be a wake-up call.

“Voters have only begun to understand just how bad the disastrous mismanagement of the COVID-19 Pandemic was, and yet the same team who caused this chaos is now running point on Monkeypox,” said Mark Meckler, President of Convention of States Action.

The government’s cause for concern comes with just 40 reported cases in the U.S., or 0.00001% of the population.

Among Democrats polled, only 48.5% said they have a high level of trust in the Biden administration’s ability to handle the outbreak, a telling sign of where Democrat support for the President currently stands.

“Common sense is a greater factor than partisanship, which is why this poll finds that less than half of Democrats–who have historically been supportive of Dr. Fauci as well as the leader of their party–have a high level of trust in these leaders on this issue,” Meckler added.

The data comes as the CDC admitted this week to causing confusion over the latest health scare, first recommending masks in the travel alert and then proceeding to withdraw the mask recommendation later the same day.

With a grassroots network of over 5 million supporters and volunteers, Convention of States’ mission is to restore a culture of self-governance in America and to curtail federal overreach. Convention of States can limit the size and power of the federal government, impose budget requirements and implement term limits on federal officials.

To show your support for the Convention of State Project, sign the petition below.