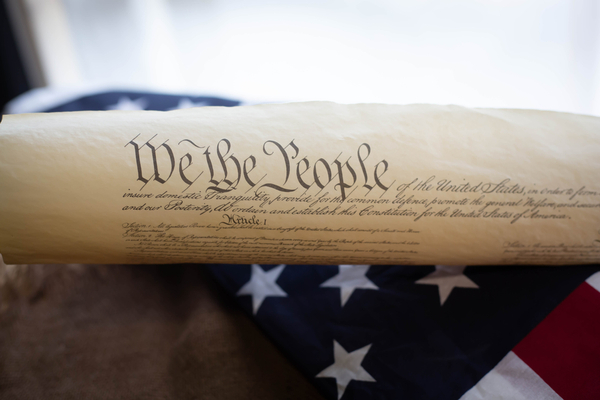 When Daniel Webster boasted that the “American Constitution is the great memorial of the deeds of our ancestors,” he made an understatement; America’s Constitution was not and is not merely a memorial to the brilliance of our Founders but to the greatest ideas of all western philosophy.

The Founding Fathers relied heavily on the wisdom of the past. They represented a conglomeration of philosophies and influences (Mosaic Law, Athenian democracy, Christian virtue, Magna Carta, John Locke, Montesquieu, Enlightenment thinking, etc.) all of which combined to produce a singular governing document that could not have come together at any other moment in history.

They also had personal experience. Their own run-ins with the crown had taught them just how easily a government could become tyrannical. Despite refined political philosophy and guarantees of rights, a government could still turn its back on its people–just as Great Britain had.

When assembling the American system of governance, the Founding Fathers knew they’d need not only to study great governments of the past but also why those governments had a fall from greatness. Creating a good government would be one thing; saving it from human nature would be another altogether.

The Founders were well acquainted with human nature and spoke of it often. James Madison warned that “there is a degree of depravity in mankind which requires a certain degree of circumspection and distrust.” “We must take human nature as we find it,” George Washington agreed. “Perfection falls not to the share of mortals.”

They knew the same human proclivities that soured England's government could crop up in the hearts of politicians anywhere. The American system, therefore, must hold the national government back from becoming a threat to fundamental rights (the inevitable danger of a government with too much power) while at the same time giving it enough power to perform a few essential tasks (to avoid the catastrophe of the Articles of Confederation).

Finding that delicate balance seemed close to impossible, but thanks to their wisdom, broad frame of reference, and Divine Providence, the Founding Fathers hit the mark. What they gave us was a Republic unlike any other, the apex of western civilization.

As Americans, we are direct beneficiaries of their profound accomplishment. We are beneficiaries of thousands of years of wisdom and experience. As Calvin Coolidge said, “[t]o live under the American Constitution is the greatest political privilege that was ever accorded to the human race."

This week, as we take a deep dive into our exceptional governing document, may we appreciate how blessed we are to live in this great nation. May we also remember Benjamin Franklin’s words upon leaving the Constitutional Convention. When asked what delegates to the convention had given the American people, the doctor answered “a Republic… if you can keep it.”

No matter how great the document the framers created was, Franklin knew there always would be an “if.” Now, it’s our generation’s turn to “keep” the American Republic, and if we lose it, as our forebears have warned, “there is no place to escape to.”

Join us in our mission to call an Article V Convention of States–which comes directly from the U.S. Constitution–and together, let’s save freedom’s last stand on earth.