The American people have lost faith in their commander-in-chief.

According to a new poll from Convention of States Action and the Trafalgar Group, a full 61% of Americans do not believe President Joe Biden can prevent the war in Ukraine from expanding to other countries.

Those figures include 72% of Independents, 82.3% of Republicans, and a surprising 35.9% of Democrats.

“This Administration failed to see this war coming, failed to do enough to prevent it, and is now failing to contain the situation. The lack of decisive action on Ukraine and a series of cringe-worthy comments from both President Biden and Vice President Harris are leaving a distinct impression with voters that Team Biden has no idea what they’re doing,” said Mark Meckler, President of Convention of States Action. “When the peace of humanity is at stake and the security of America is at risk, this isn’t a time for partisans to rejoice over Biden’s utter failure, it’s time to seek immediate solutions and new leadership.” 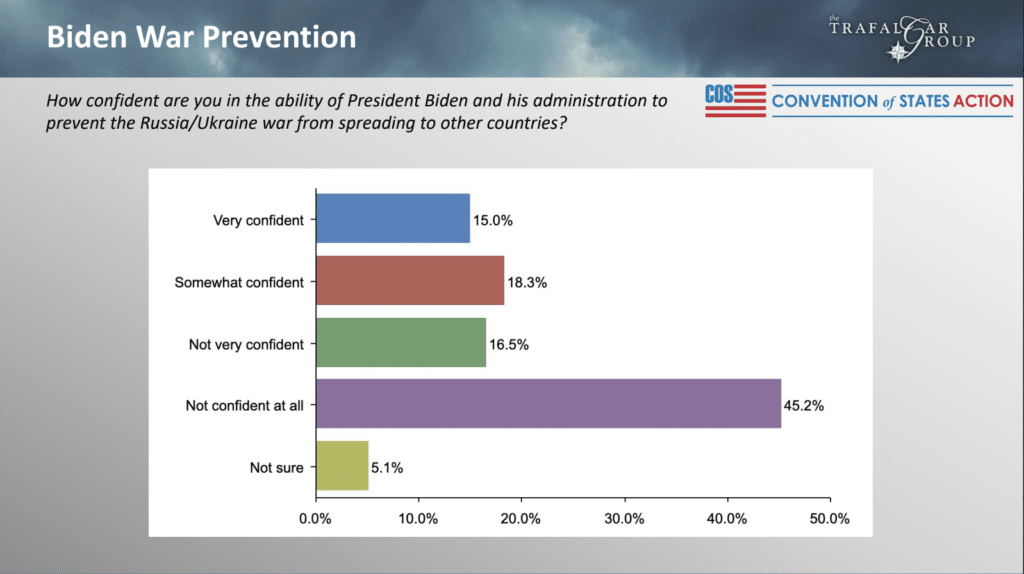 It's no surprise that Joe Biden is losing the trust of the American people. His poll numbers have been slipping for months, and his botched withdrawal from Afghanistan proved his incompetence on the world stage.

But the American distrust of the federal government goes beyond one president. Trust in the entire government in Washington has been slipping for decades. The American people do not believe their elected official in Washington have the competence or willingness to work for the betterment of all Americans. As the late Sen. Tom Coburn famously told Congress, "America doesn't trust you."

And yet, year after year, Washington accumulates more power to themselves, and the American people feel powerless to stop it -- until now.

An Article V Convention of States allows We the People to act on our distrust of Washington and strip them of their power, money, and position. A Convention of States is called and controlled by the states and has the power to propose constitutional amendments. These amendments can limit federal power, force Congress to be fiscally responsible, and mandate term limits for federal officials.

With this complete package of amendments in place, it won't matter how much the American people trust Washington. Washington will have very little power to control any area of American life, and We the People can stop worrying about the federal government and get back to our communities and our states.