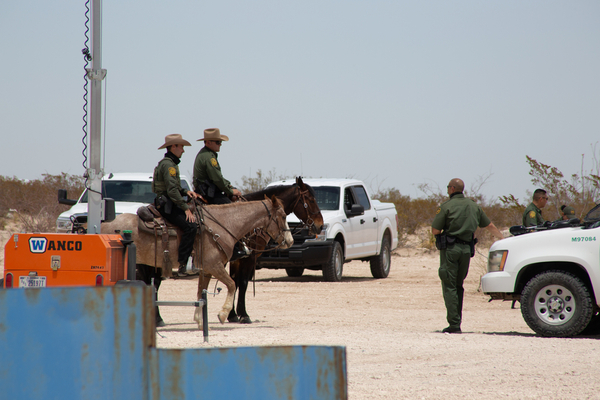 Last September, mounted Border Patrol agents in Texas were caught in a national controversy after footage surfaced of them apparently whipping migrants in Del Rio. Immigration activists took advantage of the story prematurely, rushing to conclude that the agents were mistreating the immigrants and that they, as President Joe Biden said before any investigation had even been concluded, would pay.

The narrative was misleading, however. It quickly became obvious that the mounted agents weren’t using whips at all; they were using reins. And not for the purpose of striking anyone, obviously, but for the purposes of steering their horses.

The media’s narrative quickly crumbled and the Border Patrol agents were cleared of any wrongdoing, having suffered irreversibly damaging defamation and slander.

At the time of the “whipping” incident, the border patrol agents in question were dealing with the fallout of the President’s disastrous immigration crisis. But Biden turned his back on the honorable people of his own country, people who were just doing their jobs.

Reports have recently emerged indicating that the Biden administration, working with the Department of Homeland Security, is set to punish those agents all the same, even though the investigation cleared them of any criminal activity. Needless to say, the Border Patrol is livid.

Judd added that “we've had [Rep Alexandria Ocasio-Cortez] come out and equate us to Nazis, you had the Squad come out and made false allegations that we were forcing people to drink out of toilets. These are the types of things that we have to deal with from politicians that simply do not like the mission.”

"They don't like the fact that we're enforcing the laws of the United States. And so they come out and they attack us."

U.S. Representative Kevin McCarthy expressed a similar opinion, saying, “Border patrol agents deserve a president who will support them, not smear them — which is exactly what President Biden did when he promised, without knowing the facts, that agents would 'pay' for the false allegations of 'whipping' migrants.”

What makes Biden's betrayal of the Border Patrol far worse, is that he used it to make respectable American citizens into a scapegoat for his failed immigration policies, distracting from the true problem at hand and putting the attention on a discredited falsehood: the myth of mounted agents wielding whips.

In doing so, he revealed his true colors. It really is as simple as Judd said: "They don't like the fact that we're enforcing the laws of the United States. And so they come out and they attack us.”

This brazen sellout of an agency that risks so much to enforce our laws and protect our people, is shameful. Unfortunately, the political establishment in America seems to care more about advancing its cause and securing power than doing what is right by the American people.

To show Washington your disapproval of its injustices sign the Convention of States petition below!