Our country hasn't been this divided in decades. Americans on the left and the right can't seem to agree on anything, and politics has caused divisions in families and communities across the nation.

Why? According to a new poll from Convention of States Action and the Trafalgar Group, Americans are laying much of the blame at the feet of President Joe Biden.

“President Biden came to office promising a new era of American unity, and he has fulfilled that promise,” said Mark Meckler, President of Convention of States Action. “Joe Biden has brought together a coalition of Independents, Republicans, and Democrats, united in their disdain for his policies. And now, a majority also believe he is responsible for stoking divisions in our nation. Leadership requires doing things and saying things that bring people together toward a common goal, not toward a common peril.”

According to the new poll, published last night, 54.2 percent of American voters believe President Biden is responsible for the divisions among the American people. A full 39.4 percent say he is "very responsible" while 14.8 percent say "somewhat responsible." 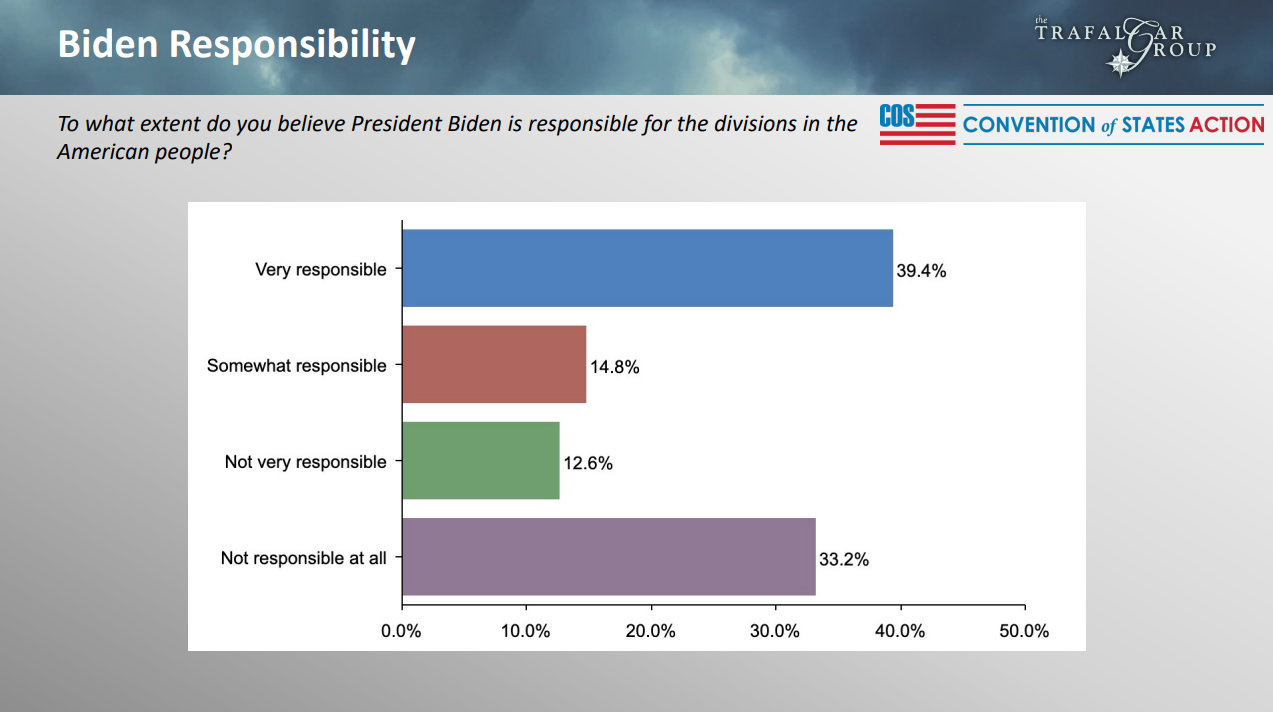 Democrats don't believe Biden is responsible for our country's divisions, but Republicans and Independents disagree. Just over 64% of Independents and a whopping 88 percent of Republicans blame the president.

The president is so divisive because he's pandering to the radical left, and, even worse, he has the power to make their dreams a reality.

Congress and the courts have abdicated their responsibility to check executive power, and now the president can issue sweeping executive orders, nationwide healthcare mandates, and draconian gun control policies.

Americans understand this. They know the president has seized this unilateral power, and one side of the aisle is constantly terrified he'll use it.

That's why America is divided, and that's why it's Joe Biden's fault.

There is a solution, but it won't come from Washington. An Article V Convention of States can address the root of our divisions by proposing constitutional amendments that limit the power, scope, and jurisdiction of the federal government.

These amendments can restrict the powers of the president and limit his ability to make unilateral changes in our country. That way, We the People can stop worrying about the president's next executive order and get back to the hard work of fixing our broken, divided nation.

To join this historic movement, sign the petition below!