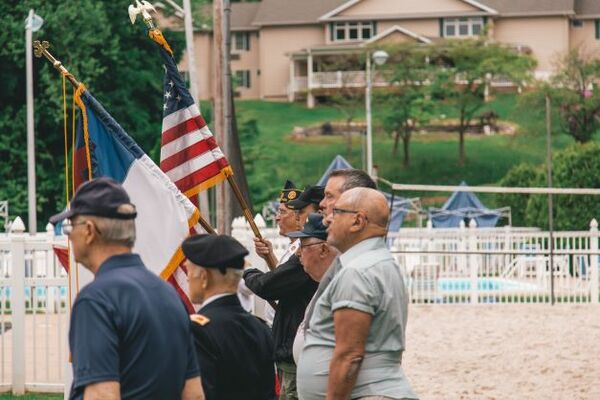 Who are we as Americans, individually and collectively? What binds us together into one of the greatest nations of the world? Much has been said in answer to this question, but arguably one of the best and most succinct passages is "The American's Creed."

"I believe in the United States of America, as a government of the people, by the people, for the people; whose just powers are derived from the consent of the governed; a democracy in a republic; a sovereign Nation of many sovereign States; a perfect union, one and inseparable; established upon those principles of freedom, equality, justice, and humanity for which American patriots sacrificed their lives and fortunes. I therefore believe it is my duty to my country to love it, to support its Constitution, to obey its laws, to respect its flag, and to defend it against all enemies." — William Tyler Page, 1917

The most powerful words in the Creed are the final seven: "and to defend it against all enemies." These words are contained in the oaths of naturalized citizenship, military service and all elected and appointed officeholders of the United States of America. Implicit in these words is the understanding on the part of each of us, as citizens of the United States of America, whether native-born or naturalized, that we are united much like a family; a great American family, bonded together through mutual trust, respect and shared values. Thus, the Creed expresses the cohesiveness, the "glue" that holds us together as a nation and very much makes the whole of America greater than the sum of its parts.

Also implicit in the creed is an understanding, appreciation and an abiding adherence to the principles stated in the Constitution of the United States and its laws. Each of us, as citizens of the United States, bears the responsibility for living our lives and treating our fellow citizens according to these principles. This imposes upon each of us the responsibilities we have to our fellow citizens, and the extent to which they are fulfilled determines how we will succeed or fail as a nation.

Lincoln’s quote also makes clear that each of us is a citizen first. That is military personnel, officeholders, sworn officers of the law, and others who must take an oath by virtue of their positions are duty-bound by their oaths as citizens first in all cases where those oaths contain elements in common to oaths of citizenship. Only the oaths of military, officeholders and sworn officers of the law containing elements not common to the citizens’ oath do they take precedence, and in those uncommon elements only. In other words, "no one is above the law."

In view of events in recent years, particularly the last decade, one may wonder if "The American’s Creed," passed in resolution by the US House of Representatives on April 3, 1918, has been all but forgotten by many of the present members of that institution as well as by members of other branches of government in Washington, DC.

The border crisis, the economy, CRT, gender identity, war in Ukraine, our disastrous withdrawal of US forces from Afghanistan and the "Bureau of Disinformation" are all part of a growing list of stories on the nightly television news that cause one to wonder if our elected government has acted in the interest of “We the People” in these instances. It is the suspicion of this writer that none of these represents the will of “We the People!”

It seems more accurate to conclude that those in power in Washington, DC do not represent their constituents. Spending is out of control, many in Congress have served for more than 30 years, and it seems that they believe everything should be under the control of those in the nation’s capital as opposed to the states, as clearly stated in the US Constitution. Things have gotten out of hand, at least out of the hands of “We the People,” the grassroots, where according to the US Constitution and the Creed, the rightful seat of power should reside.

There is a solution that, if applied, is as big as the problem. The framers of the US Constitution included Article V as a legitimate means by which We the People could amend our founding document.

The Convention of States (COS) movement is a grassroots organization whose goal is “to build a grassroots army of self-governing activists.” The project’s goal is to pass a resolution calling for a Convention of the States to consider specific amendments to the Constitution within the framework of three things:

2) Limiting the power and jurisdiction of the federal government

3) Limiting the terms of office for government officials including members of Congress.

In achieving our goal in calling for a Convention of States lies the potential of living up to the Creed, a concise statement of all the precepts and tenets in whose adherence will bring us much closer to the Democratic Republic that the Founding Fathers sought to achieve. We owe it to ourselves and our descendants!


Thomas Powers, III is a veteran of the US Army and he volunteers as a State Content Writer for Convention of States Michigan.