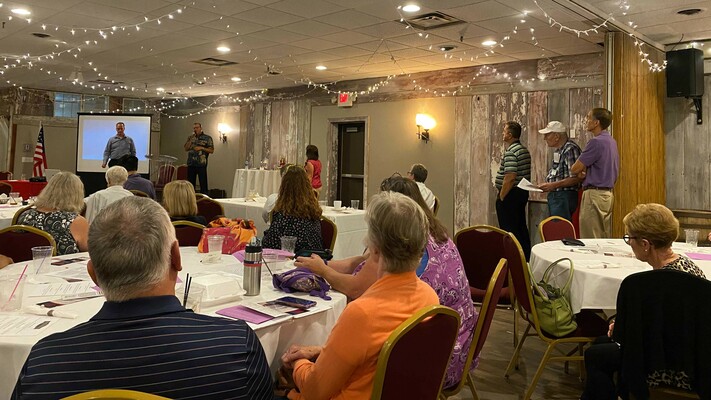 On Thursday (Aug 5) our Legislative Liaison, Steve Davidson, gave a COS presentation at Willy McCoy's Restaurant in Champlin. Also there to speak was one of the biggest critics of Convention of States, Robert Brown.

The bio for Robert Brown includes the position of Regional Field Director for the John Birch Society, an organization known for its vocal opposition to a Convention of States. Of special interest, which we'll revisit below, is that the bio included the following claim about Robert Brown:

"He can explain the founders' intent for the Constitution's Article V."

Steve presented a message of hope and of faith in our Constitution and in our founding fathers, while Mr. Brown presented a countervailing message more characterized by doubt and fear with no clear solution going forward.

At issue were two main points of contention, put into questions as:

Regarding the first point of contention, the document meant to settle the issue once and for all was Madison's Federalist No. 40, published in January of 1788, just 4 months after the 1787 constitutional convention in Philadelphia had concluded.

The title of the piece: "The Powers of the Convention to Form a Mixed Government Examined and Sustained" is a big give-away because it already claims that the powers of the 1787 convention are to be sustained, rather than be viewed as overstepping bounds.

Madison puts the argument to critics and detractors in these terms:

... let the most inveterate objectors against those exercised by the convention, answer these questions. Let them declare, whether it was of most importance to the happiness of the people of America, that the articles of confederation should be disregarded, and an adequate government be provided, and the union preserved; or that an adequate government should be omitted, and the articles of confederation preserved. ...

The states would never have appointed a convention with so much solemnity, nor described its objects with so much latitude, if some substantial reform had not been in contemplation.

It bears mentioning that, while Madison demonstrates the Framers of the U.S. Constitution didn't overstep their bounds in the main task, he does admit that a lesser criticism against what was done in 1787 (an altered mode of ratification) might have been considered to remain somewhat controversial.

Article VII of the Constitution says it can be ratified by a two-thirds super-majority of the States (by nine out of the existing 13), while previous changes to the Articles of Confederation had required universal support.

He even gives a reason why critics didn't focus on this "side topic" though, because it'd lead to the absurd possibility of just half of the people in the smallest state (equivalent to less than 1% of Americans overall) having a kind of "veto power" over something that 99% of Americans desperately wanted.

Madison still made the convincing case that, in the main course of things, the Framers did NOT overstep their bounds.

For more information on this topic, check out this article by Convention of States co-founder and constitutional lawyer, Michael Farris.

The second point of contention above deals with potential answers to the question: "Why don't we just enforce the Constitution we have?"

Before answering it though, you need to address which Constitution you mean when you ask that question. If you count the words inside the original Constitution, and if you add to that the words found in the Bill of Rights, the total word count is below 5000.

It took less than 5000 words to create a stable and lasting government structure which led to over a century of peace and unprecedented progress unmatched throughout written history. Let that sink in.

But things changed in the early 1900s, specifically in the way that the United States was governed. Power-lusting progressives started to try to read things into the Constitution which were not there.

Five thousands words cannot protect you any longer if irrational agents of government are allowed to make irresponsible claims about being able to read in-between the lines, or to pretend that we are in some kind of a "new reality" where the U.S. Constitution no longer applies.

Indeed, the elaborate "judicial interpretation" recorded in the Annotated Constitution, where we are told by 9 people in black robes what the U.S. Constitution really means, is now approximately 1 million words long.

When parenting and catching your child doing wrong, you may be on the receiving end of a long and elaborate dissertation about how, in that particular instance, your child claims to have had the right or the necessity to do what was done.

The point is, when we are trying to get away with intentional wrong-doing, then we often "over-explain" ourselves. This is precisely what was done to the U.S. Constitution when progressives intended to run afoul of it, but want to provide cover for themselves, at least in the courts.

They now have a 3000-page "Constitution Annotated" which they can point to provide for cover their behavior.

This means it is absurd to ask "Why don't we enforce the Constitution that we have?" because that is simply no longer an option. The good rules we had for governing in the U.S. have been transformed into perverted alternatives, the kinds of things that take a million words to write down or explain.

On the Reason for Including Two Methods in Article V

While Robert Brown claims to know why the Founders formed Article V in the way they did, let's get the story from the horse's mouth, instead.

The two best places to uncover the intentions behind Article V are the first published note about it, and also the last thing published about it before the Constitution was finally ratified in June of 1788.

Madison's notes about it make reference to the concerns of Col. George Mason over the existing method of amendments proposed only by Congress as being "exceptional and dangerous."

He even went on to record that "no amendments of the proper kind would ever be obtained by the people, if the government should become oppressive, as he verily believed would be the case."

That was the first thing said about it, and from that first note, the intent is very clear: the second method of amendments proposals directly from the people (acting through state legislatures) was added in case of federal tyranny.

But let's also add the last thing which was published about it before June of 1788, when the future of the nation still hung in the balance, before New Hampshire became the 9th state to ratify the U.S. Constitution and therefore to put it into effect.

A Nail-in-the-coffin Argument from Federalist No. 85

Twenty-four days before the U.S. Constitution was ratified, Alexander Hamilton was still trying to persuade the States. In doing so, in Federalist No. 85, he gives a bird's-eye view into the original intent of the Founders as to why they created two methods for amendments proposals in Article V.

The States which were holdouts and still refusing to ratify the Constitution wanted their fears dispelled about a runaway federal government. Hamilton reassured them after mentioning how hard it was to get the original draft through the convention:

"...it will be far more easy to obtain subsequent than previous amendments to the Constitution." And, "...alterations in it may at any time be effected by nine states."

And though the intent of the Founders is already clear in their desire for the States to have their own method for amending the Constitution, he even embellishes at how much the federal government is at the mercy of the States who, by the amendments process, can directly change the federal course of action:

The will of the requisite number would at once bring the matter to a decisive issue. And consequently, whenever nine, or rather ten States, were united in the desire of a particular amendment, that amendment must infallibly take place. There can, therefore, be no comparison between the facility of affecting an amendment, and that of establishing in the first instance a complete Constitution.

So, the answer to the question of "Why not enforce the original Constitution" is the Article V process is how you enforce it, should the federal government ever get out of control, as it plainly has now.

Thanks and praise go out to Steve Davidson for speaking truth to opposition and for those Convention of States volunteers who showed up to the event in order to show support.

While the number of minds which were changed (if any) is not known, that responsibility is not for us to bear. Our responsibility is to plant seeds whenever we think the ground may be fertile enough to bear fruit, but after making our personal efforts where we can, the outcome is in God's hands.