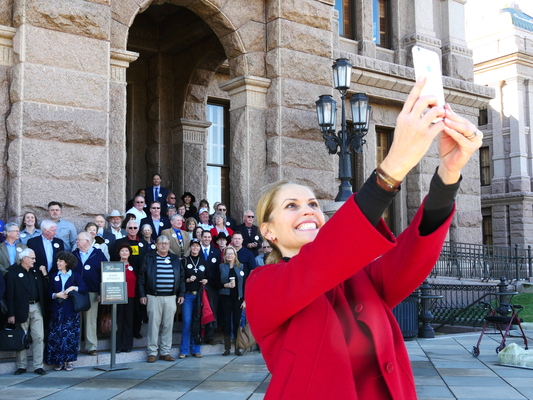 In a massive show of force by Texas House legislators and Convention of States Project Texas grassroots—Texas steps all-in to rein in the federal government and dismantle the “deep state.”

The Convention of States Texas proudly announces the final passage of SJR2, the Convention of States resolution yesterday, May 4th—the National Day of Prayer. In a massive show of force against the growing federal administrative state, the Texas legislature and the COS Texas grassroots demonstrated the power of the possible when citizens and legislators work together.

Supporters know the federal government will never limit its power—the lack of will to fully repeal Obamacare demonstrates this fact. The solutions for fixing the nation must come from the States, not inside the beltway.

“More than 256 COS activists, representing 81 Texas House Districts, watched from the Gallery,” said Tamara Colbert, co-director, Texas. “The Convention of States Project salutes Rep. Rick Miller (Sugar Land, HD-26) and his stalwart support to champion this cause, as well as the 79 co-authors who stood resolute with the grassroots to get this done.”

“This is a great day for Texas,” indicated Mark Meckler, Co-Founder of the Convention of States Project. “Texas had a winning combination of relentless grassroots, Gov. Abbott’s big microphone and legislators who championed the Texas team for three years—what a fantastic victory for everyone involved. Congratulations!”

Texas Gov. Greg Abbott endorsed the Convention of States on January 8, 2016 and had been encouraging legislators to “pass the exact same bill this year as last session.”

After a “contingency” clause was added by the House Committee in April, grassroots activists kept up the pressure on legislators to “#AMEND&RESTORE” SJR2 to the original version passed by the Senate on February 28th. House sponsor, Rep. Miller, along with several co-authors, orchestrated an amendment to restore the resolution, which was passed by a 2 to 1 margin, enabling the final floor vote on the clean version of the resolution.

The passing of SJR2 was not a slam-dunk. The 125,000 COS Texas activists worked for more than three years, conducting 400-plus meetings around the state, educating citizens and legislators as to the Article V process and the power we have as “united states” against the federal government. This victory ends the first phase of the Convention of States. Post-passage Phase Two begins in June.

The Convention of States Project is currently organized in all 50 states, including over two million volunteers, supporters and advocates committed to stopping the federal government’s abuse of power. Alaska, Florida, Georgia, Alabama, Tennessee, Indiana, Oklahoma, Louisiana, Arizona, North Dakota and Texas have passed our Article V resolution since the Project’s founding in 2013. Virginia hosted the first-ever Simulated Article V Convention of States in the fall of 2016. The 2017 legislative session has included 32 states considering the Convention of States resolution.