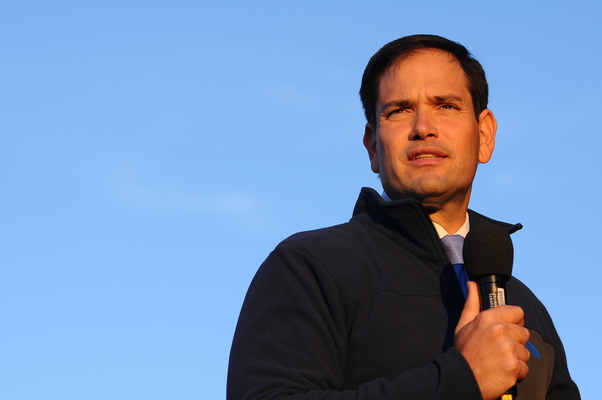 I’ve never been more excited about our prospects for achieving real governmental reform as I am right now, on the eve of 2016. Every day moves us closer and closer to the historic call for a Convention of States to restrain the federal government.  And today moved us one giant step closer.

Today, I was honored to hear that Sen. Marco Rubio endorsed the Convention of States Project as he was campaigning in Iowa.

Welcome, Senator Rubio, and thank you for taking a stand not only for our America, but for THEIR America--our children's and grand-children's America--the America that belongs to future generations of a liberty-loving people.  Thank you for stepping up to provide leadership on this important national issue.

It is gratifying when a national-level leader like Sen. Marco Rubio acknowledges that it is imperative for the citizens to act to take power away from Washington, D.C. and return it to the people.  Sen. Rubio stated that Washington D.C. will not impose limitations on itself, and that the people must do it through a convention.  He says we can't rely on D.C., and he's right.  What a great thing to hear from a Presidential candidate!  This is what the people themselves have been saying for a long time, and to have a leading Presidential candidate say it should tell you something.  The Convention of States movement has entered the mainstream of the Presidential election.

As a grassroots movement, the Convention of States Project has grown exponentially over the past year—most noticeably in the last quarter of the year. I attribute this growth to a combination of factors. First, of course, is the ever-growing frustration with a federal government operating far beyond its original constitutional powers. Secondly, though, I attribute the growth of this movement to the sheer logic of it:  of course we should use the tool the Founders gave us in the Constitution to check the rampant abuses of federal power—that’s why the amendment-proposing convention tool is in the Constitution!

This is the kind of pure, constitutional logic that every American can get behind—and they are getting behind it, in record numbers.

​Tom Coburn said, “Marco Rubio knows that the answers to American’s lack of confidence in Washington can only be fixed through an Article V Convention of States, restoring power to the states and the people by limiting the scope and power in Washington; placing term limits on politicians, forcing honest accounting and balanced budgets. He also knows that Washington will not fix itself.”

More and more statesmen and constitutional experts—the ones who revere our Constitution and have dedicated their lives to defending its principles—are stepping up to urge citizens and state legislators to use this constitutional tool before it is too late.

​The New Year is almost upon us.  With endorsements like we just got from Sen. Marco Rubio, it just might be the year ‘We the People’ call a Convention of States and get to work restraining the federal government.  Here's to a great year in 2016!​

Ready to join the team that's making history? Click here to volunteer with the Convention of States Project!