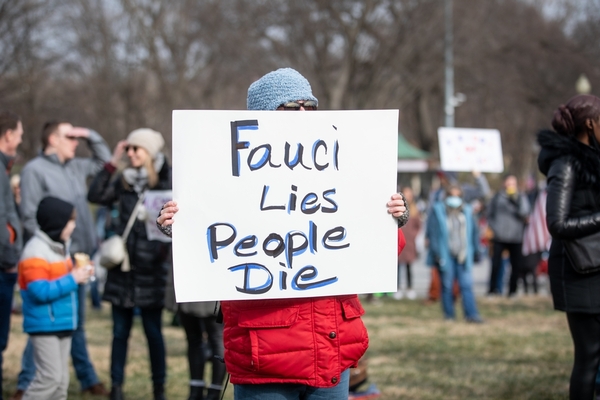 Doctor Anthony Fauci may have retired, but the American people aren’t about to let him off the hook.

New polling from Convention of States Action and The Trafalgar Group reveals that 52.2 percent of voters say that Dr. Fauci, who oversaw the nation’s botched response to the COVID-19 pandemic, should be investigated by the new Congress for his inconsistent testimony about research leading up to the pandemic, and then his actions managing the pandemic. This sentiment is most widely shared by Republicans, 80 percent of whom believe Fauci should be investigated. Fifty-six percent of Independent voters agree.

“Had the COVID-19 pandemic been well-managed, it would have been prudent for Congress to hold hearings to talk about what we learned and what could be done better in the future. And yet–despite the fact that the pandemic was horribly mismanaged and that untold millions of Americans continue to pay the price for the COVID-era policies–some that are still in effect–Congress has failed to act,” said Mark Meckler, President of Convention of States. “This poll offers a strong and clear message to the new Congress–we want you to investigate Fauci and get to the bottom of this before the next pandemic repeats the same gross mistakes.”

Fauci’s response to COVID-19 was widely criticized from many angles. At one point, the now-former director of the National Institute of Allergy and Infectious Diseases (NIAID) testified to Congress that the National Institute of Health (NIH) had never funded gain-of-function research in the Wuhan Institute of Virology (where it is believed COVID-19 originated). Documents obtained through a FOIA lawsuit later surfaced suggesting that Fauci’s statement was dishonest.

“The documents make it clear that assertions… that the NIH did not support gain-of-function research or potential pandemic pathogen enhancement in Wuhan are untruthful," explained Richard Ebright, the laboratory director at the Waksman Institute of Microbiology. Contrary to Fauci’s claim, the NIH "unequivocally" funded gain-of-function research in China, Ebright argued.

Fauci was also criticized for sending mixed messaging about masking in the early days of the pandemic. Initially, he told the American people that there was “no reason to be walking around with a mask.” Shortly thereafter, he abruptly changed face – masks were absolutely necessary, he said. Fauci blamed his change of heart on ever-changing science, data, and research, yet later confessed he intentionally misled the public to ensure that his colleague obtained masks first.

Despite these and countless other missteps, Fauci’s net worth reportedly skyrocketed to over $12 million during the pandemic. Additionally, it is projected that he will receive “well over $1 million” in the first few years of his retirement.

But as Fauci continues to enjoy his personal "financial blessings" of COVID-19, the American people aren’t so happy.

The voters have spoken – the most notorious doctor in American history must be investigated.

If Congress fails to act, this will be yet more proof that our federal government is out-of-touch. Any government that empowers unelected, power-hungry bureaucrats like Dr. Fauci to upend the lives of millions of Americans needs more than an investigation – it needs to be reined in, and the only way to do that is through an Article V Convention of States.

To join the movement, sign the Convention of States petition and get involved today!