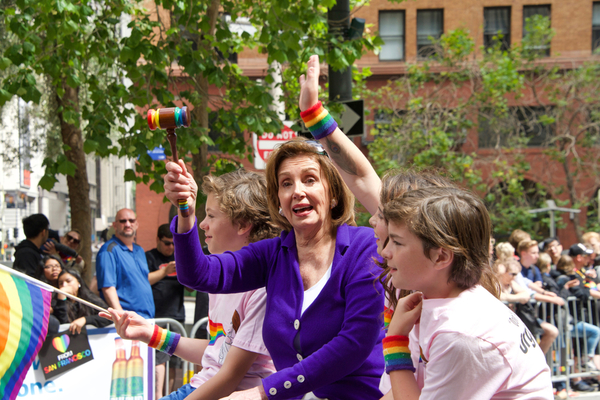 Nancy Pelosi followed through this week on her commitment to force House members to return to D.C. to reelect her as Speaker of the House. Despite the rising COVID-19 cases around the country -- and supposedly strict safety measures in Congress -- Pelosi made her colleagues return to cast their in-person votes.

In an attempt to hide her crass political motivations, she erected a "plexiglass structure" in the dead of night to allow members to vote even if they had been recently exposed to the virus, according to the Daily Wire.

“To build a structure like that, in the dark of night, to only protect the votes that Speaker Pelosi needs to get reelected speaker, is shameful,” said Rep. Rodney Davis (R-IL), the top Republican on the House Administration Committee.

"This is completely against everything we’re told throughout this entire pandemic for house operations,” Davis told reporters Sunday.

Once her reelection was secured, Pelosi dropped even the pretense of safe COVID practices.

At Pelosi's swearing-in ceremony for House members, attendees could be seen in close contact with one another and not wearing masks.

Mass swearing-in for most House members into 117th Congress instead of all in smaller groups as previously announced for COVID-19 safety floor guidelines. pic.twitter.com/e73g16x2UT

Pelosi tried to rectify the clear disregard for coronavirus restrictions in a statement released to her colleagues on Monday, calling members of Congress "essential workers."

“As Members of Congress, we are considered essential workers. We must take our responsibility seriously,” Pelosi said in the note. She added that Members are required to “wear masks at all times,” to “respect social distancing” and that she and others will make an effort to “limit the number of Members on the floor” at any given time.

No one is fooled by Pelosi's fake attempts to mitigate the spread of the virus in Congress. The Speaker cares about getting reelected, maintaining power, and looking like she's doing something about COVID.

Unfortunately, she's not alone. Our elected leaders care more about politics than people, and they've demonstrated time and again over the past 10 months that their primary concern is power, money, and reelection.

It's time to put our politicians back in their place, and the best way to do that is via an Article V Convention of States. Over four million Americans have voiced support for the Convention of States Project because we're the only nationwide grassroots movement capable of holding the federal government accountable.

If that sounds like a movement you can support, there's a Convention of States team in your state looking for leaders and volunteers! Sign the petition below to get started.