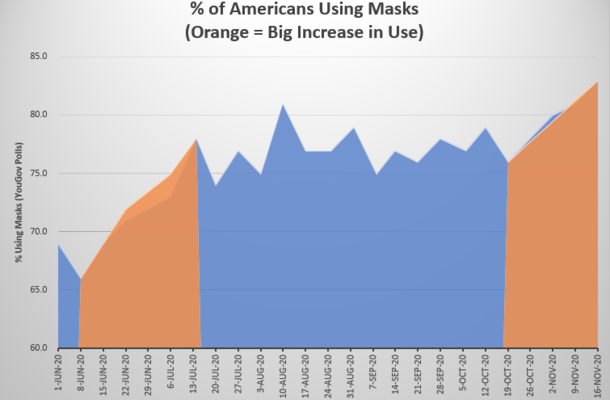 There is crisis fatigue in America right now, and some state leaders have been imposing strict mandates.

However, the mandates themselves have not been evaluated for tradeoffs, such as estimations of the benefits along with the costs.

Arguments on first principles can be made that leaders do not have the authority to impose strict and lasting mandates, but even pragmatic arguments for mandates may themselves turn out to be entirely unsound, scientifically.

The nation's overall health demands that these arguments are looked into, rather than swept under the rug in a cloud of censorship and arguments from intimidation.

By dismissing things that either don't work or actually add harm, we can focus on the hopeful prospects that exist--but which have been sidelined by pundits and partisan leaders--allowing us to (finally) move ahead to a better tomorrow.

A Big Danish: 'Breakfast' for a New Morning in America

A big Danish trial [1] recently showed that mask-wearers don't get any significant protection from infection by wearing masks outside. An interesting finding was analysis of the particular subgroup of people who wore masks "exactly as instructed" so as to get the most protection that you could ever get out of wearing a mask.

Those who wore a mask did not get any significant protection.

Mask proponents claim that while it may not help you (at all) to wear a mask, it helps your community by slowing the spread of infection and ultimately reducing the number of deaths.

But this claim can be put to the test, now. According to YouGov polls [2], there have been at least two big increases in mask use in the United States. 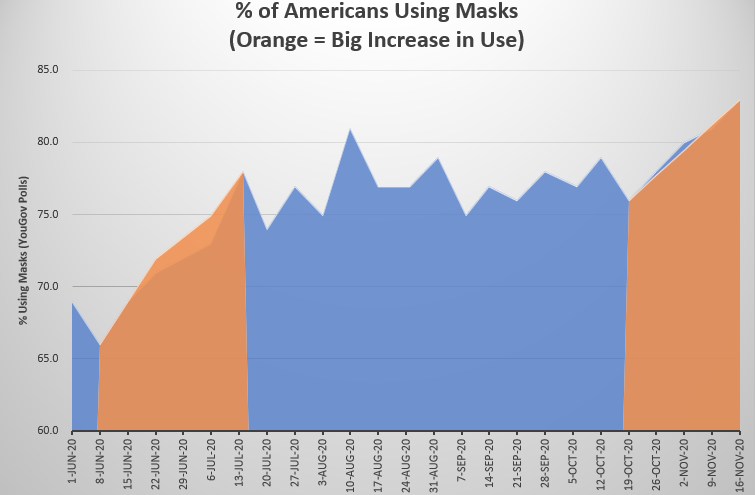 When to Look for Results

A big change in mask use should have an identifiable effect, but not immediately.

The processes of spread of infection--and of death after infection--take some time to develop. The average time from exposure to first symptoms is about six days. Therefore, six days after a change in mask use would be a good time to check for a change in spread.

In those who die from COVID-19, the average time from first symptom to death is about 16 days. A big change in mask use will have the most effect on deaths at approximately 22 days after the new level of mask use (six days incubation time, plus 16 days from symptoms to death).

Here is a graphic showing when to look for the effects from big changes in mask use: 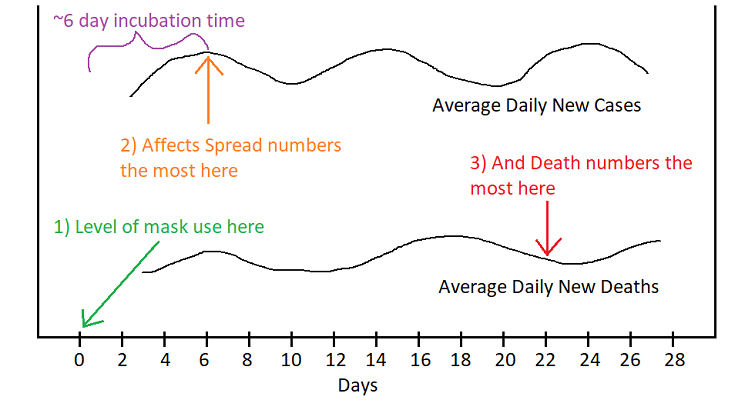 If masks were super-effective, then the average of daily new cases would have either gone down or at least not have increased much, if at all.

The opposite trend happened for these summer months. A dramatic increase in mask use actually corresponded to a large increase in spread [3]. The average daily new cases tripled in the aftermath of extra mask use.

Mask proponents may claim that this is just an artifact from testing more people (more tests equals more positive tests). To see the real effect of masks, they say you have to look at the average daily new deaths, instead.

If masks were super-effective, then the average daily new deaths would have either decreased or not have significantly increased.

The opposite trend happened for these summer months.

An increase in mask use actually corresponded to an increase in deaths [3]. The average daily deaths doubled in the aftermath of extra mask use.

Mask proponents may claim that this is just the results of a single, five-week increase in mask use and negative outcomes, and that five weeks straight of worsening outcomes as our mask use grew, isn't enough proof to show that masks do not help.

This kind of anomaly, they may say, wouldn't repeat itself. An even higher increases of mask use would be found to produce less spread and less death.

The other big increase in mask use occurred from mid-October to mid-November, including our highest-ever use as well as sustained use by over 80% of Americans.

Using the same time lag for daily new cases and daily new deaths, the cases increased by 2.5 fold after this second big increase in mask use.

An important yet uncomfortable question for our nation is this: if increases in mask use are followed repeatedly by both increases in spread and increases in deaths, then is it just the virus that's killing us, or is it that more masks have been involved in ramping up harm?

Should we be concerned when public mandates are repeatedly shown to have been having the opposite effect as claimed? Or is that question something that should rather be censored out of the national conversation? Does it deserve an answer, or at least a debate?

Has the obstinate focus on mask use or other forms of "top-down solutions" taken away from the prospects that Americans have for fortifying themselves against this disease, such as good doses of vitamin C, vitamin D, and Zinc (among other things)?

The lesson of 2020 is that Americans can take care of themselves, and that they do not need a medical nanny lording over them with untested mandates and protocols.

We have learned--along with craziness not seen before in our lifetimes--that there is no length to which leaders will not go to obtain control over our lives. But Americans themselves are the ultimate sovereigns.

May God bless America and see us through.