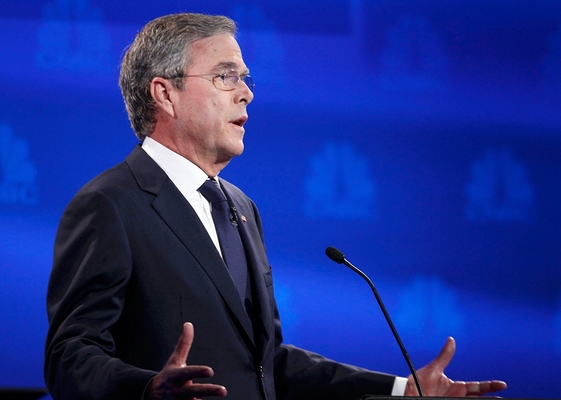 Former Florida Gov. Jeb Bush, a 2016 GOP presidential candidate, told Breitbart News Daily in an interview here that aired Friday morning on SiriusXM Patriot Channel 125 that he backs an Article V Convention of the States to amend the U.S. Constitution for a variety of reasons. Those reasons, Bush laid out in the interview conducted aboard his campaign bus here after a town hall event on Thursday evening, include having a Balanced Budget Amendment, a Line-Item Veto Amendment, and a Term Limits Amendment to the U.S. Constitution.

The comment came up when Breitbart News Daily asked Bush about his nickname during his time as Florida governor—”Veto Corleone“—which he earned for conducting so many line-item vetoes of lawmakers’ pet projects, and how his experience in the Florida statehouse is preparing him to reduce the size and scope of the federal government should he be elected president.

“Veto Corleone was created because I created a structure on the budget that everybody understood, every line item had to go through the process—and if it didn’t go through the process, I’d veto it,” Bush said. “It was pretty simple. If it went through a process, and I felt like we weren’t overspending, I showed deference to the legislature. And 2,500 line items brought about a lot of discipline. In fact, it was interesting, they kind of—in some cases—people stopped getting mad about me vetoing because they would go home and say ‘hey it’s the governor’s fault. I put it in the budget but I can’t—the governor’s too much of a conservative.’ So bringing discipline to the process and in Washington, as you know, adding a line-item veto requires a Constitutional change. I think we ought to deal with. I think there should be a Constitutional Convention of the States for a Balanced Budget Amendment, Line-Item Veto and Term Limits.”

Curious about the other supporters of an Article V Convention of States? Click here to check out our endorsements.