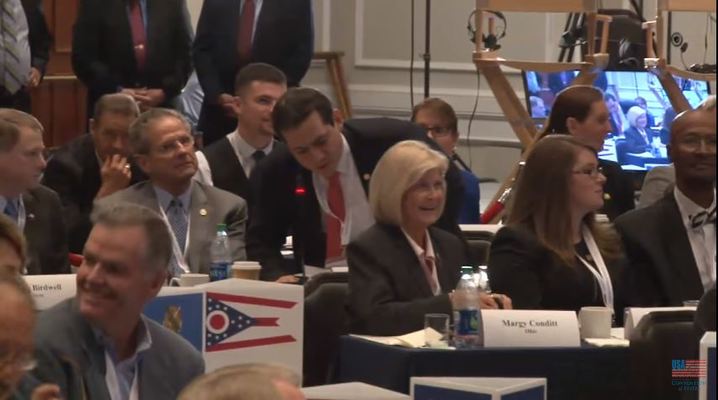 As you've no doubt heard, the Simulated Convention of States was a smashing success. Below you can read the complete list of amendments passed by the Convention. You can also read day-by-day reports from the Convention here, and a recording of the final day in the video below.

“The Convention respectfully submits these proposals to the American people with the conviction that they are a sound beginning to a critically-needed national discussion about restoring the balance of power between the federal government and the states. Further, it is the conviction of this body that the states must deliberate and adopt appropriate proposals for a balanced budget amendment and an amendment to provide the states a means to serve as a check on judicial overreach by the federal judiciary of the United States.”

SECTION 1. The public debt shall not be increased except upon a recorded vote of two-thirds of each house of Congress, and only for a period not to exceed one year.

SECTION 2. No state or any subdivision thereof shall be compelled or coerced by Congress or the President to appropriate money.

SECTION 3. The provisions of the first section of this amendment shall take effect 3 years after ratification.

SECTION 2. The power of Congress to make all laws that are necessary and proper to regulate commerce among the several states, or with foreign nations, shall not be construed to include the power to regulate or prohibit any activity that is confined within a single state regardless of its effects outside the state, whether it employs instrumentalities therefrom, or whether its regulation or prohibition is part of a comprehensive regulatory scheme; but Congress shall have power to define and provide for punishment of offenses constituting acts of war or violent insurrection against the United States.

SECTION 3. The Legislatures of the States shall have standing to file any claim alleging violation of this article.  Nothing in this article shall be construed to limit standing that may otherwise exist for a person.

SECTION 4. This article shall become effective five years from the date of its ratification.

SECTION 1. The Legislatures of the States shall have authority to abrogate any provision of federal law issued by the Congress, President, or Administrative Agencies of the United States, whether in the form of a statute, decree, order, regulation, rule, opinion, decision, or other form.

SECTION 3. No government entity or official may take any action to enforce a provision of federal law after it is abrogated according to this Amendment. Any action to enforce a provision of abrogated federal law may be enjoined by a federal or state court of general jurisdiction in the state where the enforcement action occurs, and costs and attorney fees of such injunction shall be awarded against the entity or official attempting to enforce the abrogated provision.

SECTION 4. No provision of federal law abrogated pursuant to this amendment may be reenacted or reissued for six years from the date of the abrogation.

SECTION 1. Congress shall not impose taxes or other exactions upon incomes, gifts, or estates.

SECTION 3. This Article shall be effective five years from the date of its ratification, at which time the Sixteenth Article of amendment is repealed.

Whenever one quarter of the members of the United States House of Representatives or the United States Senate transmits to the President their written declaration of opposition to any proposed or existing federal administrative regulation, in whole or in part, it shall require a majority vote of the House of Representatives and Senate to adopt or affirm that regulation. Upon the transmittal of opposition, if Congress shall fail to vote within 180 days, such regulation shall be vacated. No proposed regulation challenged under the terms of this Article shall go into effect without the approval of Congress. Congressional approval or rejection of a rule or regulation is not subject to Presidential veto under Article 1, Section 7 of the U.S. Constitution.