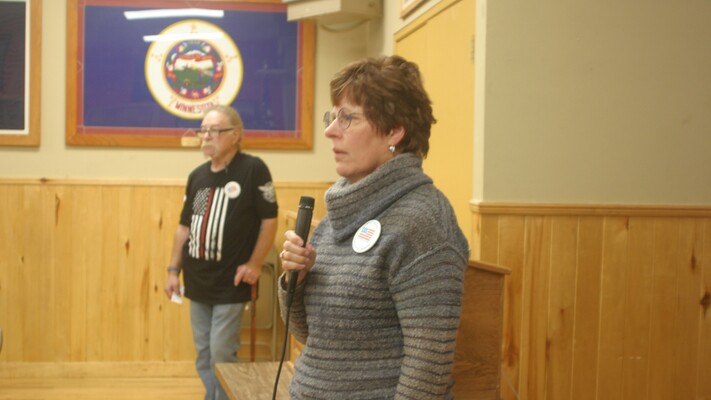 Northwest Minnesota was alive with excitement last Saturday due to a Convention of States town hall held in Bagley.

The local newspaper man, Tom Burford, not only helped to promote the town hall with a news story beforehand, but also came to the town hall to report on it. He wrote up a beautiful report on the event (reprinted in full, below).

It is such a wonderful thing to have fellow patriots help where they can to get the word out for a Convention of States. MN is truly blessed.

State Co-Director, Mary Jo Baarsch (header photo) presented at the town hall, where the American Legion was packed with 75 guests. 53 petitions were signed and 13 showed interest in volunteering for Convention of States. That's a success by all measures!

Regional Captain, Michael Biscardi (also header photo), was instrumental in working with a local patriot, Wayne Christensen, to make this event happen -- and Michael played a role of "master-at-arms" by announcing at the outset that the town hall would be proceeding in a civil manner, in response to experiencing an ongoing disruption at a recent town hall.

Needless to say, the town hall proceeded without disruption:

And let's not forget the work of our Call Commandos who work so hard to help to get the word out and to make each of these town halls a success. Here is the beautiful write-up of the event by Tom Burford:

Are you sick and tired of federal actions (or lack thereof)?

Learn how a Convention of States can make a change

By Tom Burford
“The Founders knew a corrupt and powerful federal government would not correct itself.”

Those words were spoken by Mary Jo Baarsch before a full house at the Convention of States meeting held Saturday afternoon, Oct. 16, at the Bagley American Legion Auditorium.

People came to learn what a Convention of States (COS) is all about and to hear from guest speaker Mary Jo Baarsch of Backus, Minn.

The aim of the COS movement is to have at least 34 states call on Congress to call a COS to propose amendments to the United States Constitution. Exact wording in the COS literature is as follows:

Section 1. The legislature of the State of (X)
hereby applies to Congress, under the provisions of Article V of the Constitution of the United States, for the calling of a Convention of the States limited to proposing amendments to the Constitution of the United States that impose fiscal restraints on the federal government, limit the power and jurisdiction of the federal government, and limit the terms of office for its officials and for members of Congress.

Why call for a COS?

Baarsch told how large and powerful the federal government has become and how bureaucrats and judicial overreach are forming new regulations. She used a projector to show images related to federal expansion. One view showed a pile of papers to indicate how many laws were actually passed by Congress.

“This is not a partisan issue,” she said. She related that in a poll ranking support of a COS, members of the GOP were 75% in favor, Democrats 55% and Independents 64%.

Term limits are on the subject list because so many office holders stay in for life. “The Founders did not intend for (elected) offices to be careers,” Baarsch said, noting that lawmakers would convene when needed and then go about their usual private businesses. She showed a chart indicating the average number of years in office held by members of Congress. In the first Congress, one term was the average. Today in the 115th Congress, the average of years in office is 13.

“The longer they are in office, the more they smell like ‘The Swamp’,” Baarsch said. “They won’t vote for term limits.”

She referred to Col. George Mason who on Sept. 15, 1787 during the Constitutional Convention, asked, “What if Congress becomes an obstacle?” The answer to this was Article V of the Constitution, which allows the states to call for a COS to propose and vote on amendments. This would enable states to reduce the size and reach of the federal government, which was a major concern when drafting the Constitution.

Thirty-four states must agree to the exact same language and each state only gets one vote. It is totally up to legislators to call for a COS, and governors have no vote or veto power.

“We want the states to use their power to get our nation back on track,” Baarsch said.

To get legislators in action, she said people must submit the petition. If enough petitions are submitted, then legislators will feel pressured to vote for it. She noted that the resolution is sitting in the Minnesota House and Senate, with the latter body showing “a lot of support.” To date, she said Rep. Steve Green is okay with the COS, but Rep. Matt Grossell and Sen. Paul Utke so far have not made a commitment.

If a COS is called, 38 states must vote in support of an amendment for it to become part of the Constitution.

In Minnesota, Baarsch said there are 50 state captains so far, with one needed for each legislative district. She said more volunteers are needed. She also urged members of the audience to become involved in their Basic Political Operating Unit (BPOU), and the best way to start is to attend the party caucus meetings in February.

“We need all the volunteers we can get,” she said, noting that a volunteer might do something as easy as make phone calls. She also is looking for people to utilize social media to spread the news. Signs are also available for purchase.

Baarsch showed a video of the late Dr. Tom Coburn, a proponent of the COS. He stated in the video: “Giving up is not in our nature….It requires work and sacrifice….A great cause is our grandchildren, our nation, our freedom….We aren’t seeing what we want from either party….You have to do it, because Washington will never do it.”

“We can do it,” said Baarsch. “There are people just like you everywhere.”

“Nobody’s coming to save us.”

She told how people just want to be left alone and that is how the federal government was allowed to expand. “It’s our fault,” she said. “We have to be more involved.”

Also speaking was Mike Biscardi of Grand Rapids, Minn. He said he grew up on Long Island, N.Y., and had to leave for a rural area because he just couldn’t stand the city any longer. Speaking on how people just minding their own business allowed the federal power to expand, he said, “I’m just as guilty.”

A member of the audience told how she was in New York State and found that the rural people there think just like those in rural Minnesota. “We ask, ‘what can we do?’” Then she added, “This (the COS) is like a lifeline to us.”

Another member of the audience said, “The COS doesn’t just apply to conservatives.” The issues “cross party lines.”

To learn more about the COS go to: conventionofstates.com.
If you want to contact Baarsch, email her at mary.baarsch@cosaction.com

Our Mission: To grow a strong, engaged army of self-governing grassroots activists.