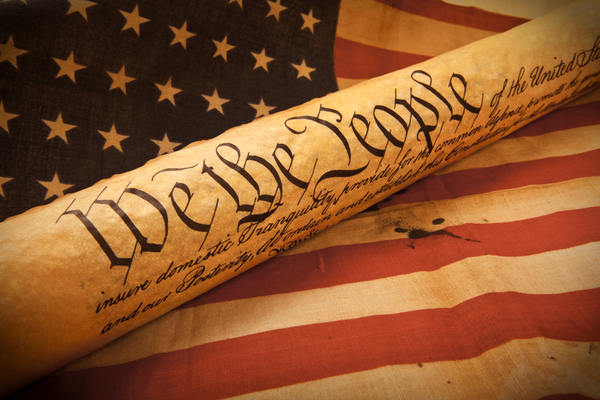 “The government is the strongest of which every man feels himself a part.” -Thomas Jefferson, letter to H.D. Tiffin (Feb. 2, 1807)


The United States was founded by individuals who believed that all people have certain basic rights endowed by God that must be protected to prevent rule by an overly authoritarian government. To provide this protection, they wrote and encoded the basis of law for our government in the original U.S. Constitution and the Bill of Rights.

But today, many Americans are unaware of what these documents say. We hear terms such as “First Amendment rights” and “Second Amendment rights” during newscasts, but what are these rights? Does our media today accurately portray the intent of our country’s Founders?

Our government appears to be at a crossroads, one that leads to either abandoning the Constitution as the basis of law in our country or choosing to live as a republic under constitutional law. But what is the law embodied in our Constitution?

What does it mean for us in today’s complex world to have a document that was passed in 1787?

These are complex questions, with answers that go beyond the scope of a single article, and are meant to cause us to take a moment, pause, and ask ourselves, “What kind of government do I want, as a citizen of the United States? Do I trust the intent of those who founded our country and the document they created? If so, why? If not, why?”

In this article, I will discuss some of the thinking of our country’s Founders, as well as what the Constitution itself says.

If a long history of success is any indication, the Constitution meets it. It has been the basis of our country’s working government for over 200 years, and has helped the United States become a country that is associated with freedom around the world.

This freedom was carefully and intentionally pursued, in the definition of the form our Republic would take. The Constitution created three branches of government and prevents absolute power from being held by anyone, since each acts as a “check and balance” for the other two branches.

To say that our Founding Fathers did not trust “big government” or the corruption that could occur over time is an understatement.

Benjamin Franklin foresaw the difficulties that would one day arise when the desire for money and power arose, in a statement that sounds like today’s news: “What kind of men will be able to strive for this lucrative pre-eminence through all the hustle of cabal, the heat and contention of parties, tearing apart the best of characters? It won’t be the wise or moderate...the people who love peace and order and the men most suited to trust. It will be bold and violent men, those with strong passions and unrestrained activity in selfish pursuits. These men will become your rulers...” (from Dangers of a Salaried Bureaucracy, 1787).

The Constitution was written to try and prevent this type of power grab for as long as possible. Its preamble starts with “We the People of the United States.” This tells us that those who wrote the Constitution intended that the power of government should remain first and foremost with the people.

The preamble also states why the Constitution was written: “to establish justice, insure domestic Tranquility, provide for the common defense, promote the general Welfare, and secure the Blessings of Liberty to ourselves and our posterity.” In other words, the writers were attempting to ensure liberty not only for themselves but also for the generations that would follow by creating a document meant to protect individual freedoms.

So, what do the various Articles of the Constitution say?


Article I defines the following:

• It describes the legislative branch of government (Congress), which includes the Senate and House of Representatives.

• It discusses term limits for members of Congress, how often elections will occur, requirements for running for office, and how often to determine the census for tax and representation purposes.

• It describes the duties of Congress:
• To create the laws for our nation.
• Financial powers: the power to levy and collect taxes, to mint money, to pass laws to appropriate money for national financial obligations and payments (including recruiting and paying the military).
• Other powers include the ability to declare war and oversee immigration.

While the legislative branch is empowered to raise money to pay the national debt, having debt at all was never the intention of the Founding Fathers.

Contrary to Modern Monetary Theory, or MMT (which states that it is fine to run up as much debt as we want because we can always just print more money to pay it off), Thomas Jefferson stated “I however place economy among the first and most important of republican virtues, and public debt as the greatest of the dangers to be feared....the principle of spending money to be paid by posterity under the name of funding is but swindling futurity on a large scale,” (from a letter to William Plumer, July 21, 1816).

Strong words indeed regarding the national debt. George Washington agreed: “No pecuniary consideration is more urgent than the regular redemption and discharge of the public debt...” (Fifth annual address to Congress, December 3, 1793).

Samuel Adams, one of our nation’s Founding Fathers, specifically feared that one day people would attempt to create legislation that would level wealth and ensure holding property and the means of production of goods in common (today, known as socialism). He noted that “These ideas are arbitrary, despotic, and in our government, unconstitutional,” (House of Representatives of Massachusetts to Dennys de Berdt, January 12, 1768).

Article II of the Constitution defines:

• The executive branch of government includes the office of the President and Vice President, departments in the government, and the duties of this branch, like enforcing the laws created by Congress.

• Who's qualified to run for President, the term of four years, the compensation for this role, and its duties which include:
• Commander-in-Chief of the Army and Navy
• Making treaties
• Appointing ambassadors
• Nominating Supreme Court judges
• Appointing heads of executive governmental departments
• Giving the State of the Union address to Congress

While the President has veto power, it was meant to be used only when the President believes that legislation proposed by Congress is unconstitutional (not when his political party disagrees with it).

In a sober warning of the tendency for government to seek power, Benjamin Franklin predicted, “The executive will be always increasing here, as elsewhere, till it ends in monarchy,” (The Madison Debates, June 4, 1787).

James Madison spoke even more forcefully against too much power in the government: “I believe there are more instances of the abridgment of the freedom of the people by gradual and silent encroachments of those in power than by violent and sudden usurpations,” (address at the Virginia Convention, June 16, 1788).

Article III describes the judicial branch, which includes the Supreme Court and inferior courts (federal courts), and their duties. These include:

Article III also defines the right to a trial by jury in the state in which the crime is alleged to have been committed.

Today, some are concerned that the Supreme Court has gone outside its bounds by legislating from the bench, instead of upholding the Constitution. Thomas Jefferson feared that this very thing would occur over 200 years ago:

“But the opinion which gives to the judges the right to decide what laws are constitutional and what not, not only for themselves in their own sphere of action but for the Legislature and Executive also in their spheres, would make the Judiciary a despotic branch,” (written by Jefferson to Abigail Adams, 1804). He also wrote, “The Constitution is a mere thing of wax in the hands of the judiciary, which they may twist and shape into any form they please.” (Thomas Jefferson, letter to Judge Roane, Sept. 6, 1819).

Robert Yates (1738-1801), a famous anti-federalist, also warned of how this branch of the government could be used to undermine state authority: “Perhaps nothing could have been better conceived to facilitate the abolition of the state governments than the constitution of the judicial. They will be able to extend the limits of the general government gradually, and by insensible degrees, and to accommodate themselves to the temper of the people” (Brutus’ Anti-Federalist No. 1, October 18, 1787). Some say that we have seen this very thing occur during the past century, with a “constitution” that now numbers in the thousands of pages because of the addition of Cupreme Court rulings.

This Article has also been in the news recently, with those living in border states raising the question of whether open borders – and the hundreds of thousands of illegal immigrants that are crossing directly into border states from Mexico – constitute an “invasion,” and what to do about this issue in the face of the federal government’s refusal to take action or even acknowledge the problem.

Article V allows proposing an amendment to the Constitution when two-thirds of Congress agree to it. It also allows the states to directly call for a Convention of States for “proposing amendments, which in either case, shall be valid to all intents and purposes, as part of this Constitution when ratified by the legislatures of three-fourths of the several states or by Conventions in three fourths thereof...”

This is the Article that the Convention of States Project was founded upon. Our Constitution clearly defines this right for the states to call a convention to propose amendments to be taken to state legislatures for discussion and possible ratification if three-fourths of the states agree. This was a final safeguard that allowed the states to directly convene instead of relying on the federal government.

Article VI describes the Constitution as the “supreme law of the land” and that all three branches of government, and the states, must follow it.

Article VII states that nine states out of the original 13 would be sufficient for ratification of the Constitution, followed by the witness signatures of representatives from the original states.