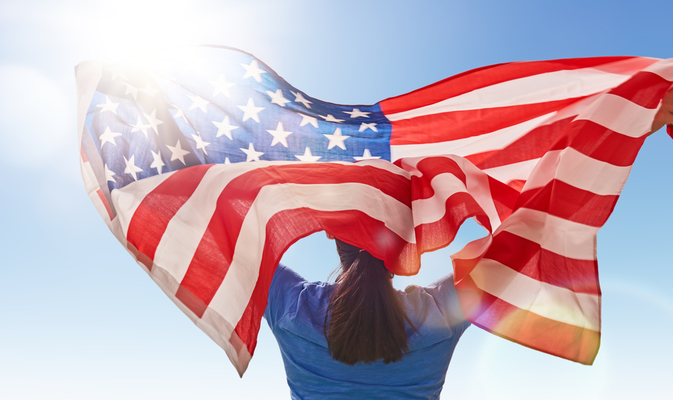 Writer and national figure David Horowitz gave the following address in New Orleans on August 10 at the annual meeting of ALEC -- a policy organization of thousands of state legislators.

I want to thank my old friend Lisa Nelson and ALEC for inviting us to present our case for a Convention of the States whose purpose would be to reform our Constitution.

Why are we raising this prospect of reform to the fundamental law of the land? It’s because we are in the midst of a constitutional crisis the likes of which we have not seen since the Civil War. It’s because a political left which rejects the framework of the Constitution is now in control of the Democratic Party and is pursuing an agenda that has already destroyed key pillars of our democracy and will go on to destroy its very foundations if bold measures are not taken.

The greatest weakness displayed in defending these foundations by those of us who cherish them, is our failure to leverage the power we have – the power the people have given us – to stop the assault on our institutions and values.

For example, the signature legislation of the Obama administration – the Affordable Care Act – was the greatest assault on individual freedom and individual choice in our lifetimes. You can’t keep your doctor if you like him; you can’t keep your plan; and you can’t choose not to have a plan – the government’s plan. Even worse, our real goal is a single payer system - to have all 330 million of you in the federal government’s pocket.

Republicans promised to repeal Obamacare. For six years between 2010 and 2016, the American people elected Republican congresses to do just that. But they didn’t. Fear of the Democrats, fear of the media, fear of unintended consequences paralyzed them. The conservative dominated Supreme Court declared this unconstitutional socialist law constitutional. It took a bold president, unintimidated by the left and its media lackeys to begin to undo the damage.

Another example: We control 33 state legislatures that fund and run the schools that shape our future generations from kindergarten to the graduate level. Over the course of half a century these schools have been turned into indoctrination and recruitment centers for the Democratic Party and its socialist left. Conservative faculty and conservative texts have been purged from our collegiate institutions, and conservative speakers barred from campus. At the K-12 level, school curricula have been turned over to racist organizations like Black Lives Matter, and terrorist organizations like the Muslim Brotherhood. Teachers feel entitled to organize students to leave their classrooms and join mass street protests for partisan issues like gun control. School assemblies are held where teachers burst into tears over the election of a Republican president and sow extravagant fears in their youthful charges as to what that might mean for their futures. Ludicrous doctrines dear to the left, like “gender fluidity” and “white skin privilege” are being taught to first graders. An alphabet book for five and six year olds current in public school systems is called “A Is For Activist.” And “F is for feminist. C is for Counter Corporate Vultures. M is for Megaphones Marching. Hip Hip Hooray it must be May Day. T is for Trans. U is for Union. Union yes!” “X is for Malcolm X.”

The political subversion of our schools by an anti-American left is without doubt the greatest long term threat to our democracy. Yet 33 conservative legislatures are doing nothing about it. The solutions are quite straightforward. Withhold funding unless school administrators restore professional standards of fairness, inclusion and political neutrality to the classroom. Instead, state appropriations and education committees are sitting on their leverage and not using it. Because they fear unknown consequences.

The same fear is behind the failure to support a Convention of the States whose purpose is to reform the Constitution to meet the threats we are facing now.

Here’s what you should actually be afraid of:

The Democratic Party is now a socialist party. It is driven by identity politics, a form of cultural Marxism, which is racist and collectivist – the antithesis of what the American founding was about. The current leadership of the Democratic Party views America as a society of racial and sexual hierarchies that need to be reversed. This is a doctrine incompatible with a Constitution opposed to the characterization of individuals by race, gender and ethnic origin – a Constitution specifically designed to protect individual rights and individual equality, regardless of race, creed and origin.

Democrats’ disrespect for America’s constitutional order is on display every time an originalist is nominated for a Supreme Court seat. To a man and woman, Democrats regard the Supreme Court as a legislative body and want to know the policy outcomes of any appointment before granting their consent. Ever since the character assassinations of Judge Bork and Clarence Thomas they have politicized the nomination process in the most unscrupulous manner imaginable, and therefore the Court as well.

The treachery of the Court actually began 58 years ago with the decision to ban prayers and then religious references in the schools, so that required texts can no longer refer to “Pilgrims” or America’s religious origins. The Supreme Court is supposed to enforce the Constitution, but since that decision, the Supreme Court has been the greatest institutional threat to constitutional order. It cries out for reform that only a Convention of the States can accomplish.

The 1964 decision banning prayer from the schools was the result of a fraudulent suit. It was brought by a demented communist and anti-Semite named Madalyn Murray, who thought of the United States as “a fascist slave labor camp run by a handful of Jew bankers in New York City.” The month before she launched her campaign Murray was in Europe with her two sons seeking to defect to the Soviet Union. Unlike the ACLU, which abetted her case, or the Supreme Court justices who agreed to hear it, the leaders of the Kremlin saw how disturbed she was and refused to take her in. Whereupon she returned to the United States to declare war on the foundations of our social contract.


In the Murray case the Supreme Court decided by a vote of 8-1 to ignore 200 years of continuous tradition – so much for stare decisis – and to justify its betrayal by distorting the First Amendment to pretend that a morning prayer was sufficient to establish a religion. More ominously the Court circumvented the democratic process, a pattern that would prevail for the next half century. The prayer issue could have been resolved through compromise by thousands of school boards or 50 state legislatures instead of nine un-elected lawyers, appointed for life. This was tyranny in action. Only the recent appointment of Justice Gorsuch has temporarily halted the advance of this anti-American juggernaut.

The same travesty of justice has been repeated in many subsequent Court decisions but most significantly in the 1973 case of Roe v. Wade. This decision sowed divisions so deep they have fractured the body politic and made us two nations today instead of one.

Predictably, the same radical actors were behind Roe, in this case members of the campus SDS at the University of Texas. The 7-2 decision to discard stare decisis was based on a non-existent “right to privacy” that the ACLU-Planned Parenthood lawyers had invented for the purpose. In dissent, Justice White observed that actually there was no right to privacy – or semblance of one - in the Constitution, while Potter Stewart pointed out the obvious: there was nothing private about an abortion.

Like Murray, Roe also circumvented the democratic process.  Perhaps the most striking case of this was the establishment of gay marriage as a fundamental right by a single vote, over-riding thousands of years of precedent. As it happens by the time the decision was made 60% of the American public approved of gay marriage. The real effect of the Court’s intervention was to disenfranchise 50 state legislatures and circumvent the democratic process. Like Roe, it also provided the legal basis for the Obama regime to persecute religious institutions and businesses from the Little Sisters of the Poor to the Colorado baker whose business was destroyed because baking a wedding cake for a gay marriage went against his religious conscience.

Here is how law professor Lino Graglia described the gay marriage decision: “Even for Americans unfortunately grown used to having radical cultural changes decreed by the Court, it should be impressive that the Court could by a margin of one vote decree that ‘marriage’ no longer means the union of one man and one woman and deprive fifty state legislatures and Congress of the power to have it retain that meaning. At the same time, it could hardly be clearer that the decision, as Chief Justice Roberts pointed out in dissent, has nothing to do with the Constitution. It is an egregious example of the Court’s usurpation of legislative authority. To accept it without protest is in effect to accept a change in our form of government, from the system of representative self-government in a federalism with separation of powers created by the Constitution to government, to a large extent, by the Supreme Court.”

Unfortunately, our conservative state legislatures – 33 of them – have failed so far to rise to this challenge and defend the constitutional order to which we all are committed, the principle of democratic pluralism, the idea that government – our government – rests on the consent of the governed, and that the Supreme Court should interpret and enforce the law not create it.

The Convention of the States is your chance – and probably your only chance - to do something about this. To reform the Court as necessary. To prevent the federal government from extruding its powers into areas which it was never designed to do. To prevent it from destroying individual freedoms through socialist programs like Obamacare.

The Convention of the States is your opportunity to leverage your power in defense of the constitutional system and the nation it created.

Do battles like this entail risks? Of course, they do. But doing nothing incurs the greatest risk of all.

Make no mistake. The left’s war on the American founding is not incidental. It is calculated and deliberate. The left’s goals – redistribution of income, leveling the playing field, privileging so-called marginal groups over so-called oppressor groups – are as incompatible with America’s principles of individual freedom, individual accountability and individual equality as was the slave system that provoked the civil war. As Lincoln famously said: a nation cannot long endure half slave and half free. Nor can it endure half committed to the collectivist and racist goals of the political left, and the principles of individual freedom that built this country. There is no exit from this war. You are either going to fight for America and its ideals, or you are going to surrender to the leftists, and help them to prevail.

The good news is this: the opportunity to win this war has never been greater.

We have entered a new political era in which a newly elected conservative leader has shown what principled boldness can accomplish. If we are not paralyzed by fear and self-loathing, we can stand up to our enemies instead of appeasing them. If we are not afraid of upsetting our allies we can get them to fulfill their commitments and strengthen our alliance. If we are not intimidated by threats of trade wars, we can get free trade and fair trade as a reward for our persistence.