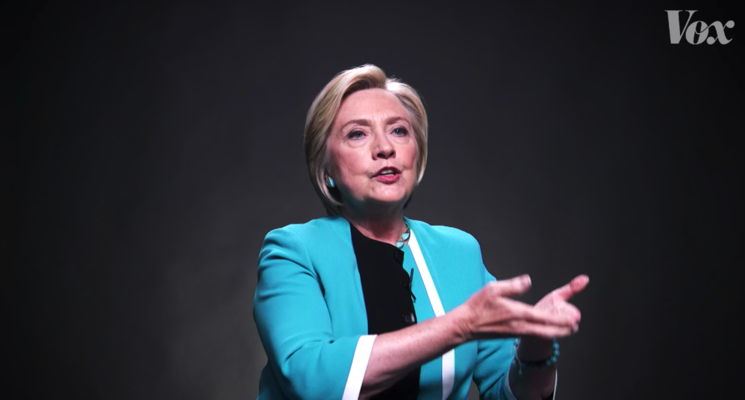 The following article was written by Taryn O'Neill and originally published on Legal Insurrection.

While making the rounds on her book tour, Hillary Clinton recently sat down with Vox’s Ezra Klein to discuss her failed presidential bid, President Trump, and the challenges currently faced by the Democrat minority. Among those challenges, Clinton warned, is a “radical change” being pursued by forces on the right:

“There’s a big move for change coming from the right that I think would be disastrous for our country. They want radical, ‘pull ’em up by the roots’ change. They want to have a constitutional convention to rewrite our constitution, to make it friendlier to business, to inject religious and ideological elements. So talk about radical change! They are pursuing it, they are funding it, and they are electing people that are either true believers or are willing vehicles for it.”

It is safe to assume Clinton is attempting to refer not to a “constitutional convention,” but to a convention of states. As Article V of the Constitution explains (emphasis added), “The Congress, whenever two thirds of both houses shall deem it necessary, shall propose amendments to this Constitution, or, on the application of the legislatures of two thirds of the several states, shall call a convention for proposing amendments, which, in either case, shall be valid to all intents and purposes, as part of this Constitution, when ratified by the legislatures of three fourths of the several states, or by conventions in three fourths thereof as the one or the other mode of ratification may be proposed by the Congress;”

There are, therefore, two ways to propose and draft amendments to the Constitution. The first is by Congress and is the process with which most Americans are familiar. The second is instigated upon receipt of applications, or state legislative resolutions, by two-thirds (34) of the states. As Legal Insurrection has explained in past posts on the subject, this convention of the states does not pass constitutional amendments into law, but merely proposes and, if approved, sends amendments to the fifty states for an up or down vote. The process is neither an open, runaway, constitutional convention nor can it somehow result in a constitution written anew. Exactly where Clinton gets her information on the convention of states or Article V process remains a mystery. It is clear, however, that she failed to consult even Wikipedia, which has a fairly straightforward entry on the procedure.

Clinton also sounded off on the issue earlier this month in a September 12 episode of the Pod Save America podcast:

“The right wing, aided and funded by Mercers, Koch brothers, etc. is very serious about calling a constitutional convention. Part of their gerrymandering is to control state legislatures, elect republican governors. If you really get deep into what they’re advocating: limits on the first amendment, no limits on the second amendment, limits on criminal justice. I mean, there is a very insidious right wing agenda that is hard for Americans to really wrap their heads around.”

This statement, too, contains fundamental inaccuracies. Neither of the two right-leaning groups advocating for an Article V convention seek to impose any changes on the first or second amendments. Neither are they wishing to touch criminal justice. The first of these groups advocates solely for a balanced budget amendment and nothing more. The second force behind the Article V movement is the Convention of States Project, which has gained increased momentum since its founding in 2012. The latter group, or COS Project, advocates for limiting the scope and jurisdiction of the Federal Government, setting fiscal restraints on Congress (a balanced budget, for example), imposing term limits on federal officials. In other words, state legislative resolutions passed would explicitly limit the convention being called to the aforementioned subject matters.  As of this writing, thirteen state legislatures have formally called for a convention of the states on the above three subject matters, the most recent states being Texas and Missouri.

Although Clinton lacks a fundamental grasp of the convention of states process, she is clearly concerned any movements to restrain the power of the Federal Government.