On June 14, 1777, the Second Continental Congress took a break from writing the Articles of Confederation and passed a resolution stating that

“...the flag of the United States be 13 stripes, alternate red and white,” and that “the union be 13 stars, white in a blue field, representing a new constellation.”

Bernard Cigrand, a small-town Wisconsin teacher, originated the idea for an annual flag day in 1885, to be celebrated across the country every June 14. That year, he led his school in the first formal observance of the holiday.

The Congress also requested, by joint resolution approved June 9, 1966, as amended (80 Stat. 194), that the President issue annually a proclamation designating the week in which June 14 occurs as “National Flag Week” and calling upon all citizens of the United States to display the flag during that week.

From my personal experience in the US Marine Corps, the raising and lowering of the US Flag is considered a sacred event to honor all American service members past and present. Morning Colors are performed at 8 AM. A Bugler plays “Call to Colors” when out of doors and in uniform Marines come to the Position of Attention and face in the direction of where the flag is known to be and renders a hand salute, that position is held until the bugler finishes. Likewise, at sunset, the same procedure is rendered, again to the sound of the Bugler’s call. If a Marine is not in uniform he is still required to come to attention and face in the direction of the flag without saluting. Additionally, all US military services have their own traditions in respect to honoring our flag.

Resource to learn more about our Flag can be found in the book “Honor Our Flag - flag etiquette book” which can be found online. 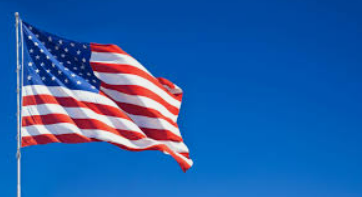 So in honor of the rich history of our flag and everything that it represents, fly it proudly all week long. Pay tribute with your Flags Out!

"I pledge allegiance to the flag of the United States of America, and to the republic for which it stands, one nation under God, indivisible, with liberty and justice for all."