Fans of Mark Meckler's weekly show, The BattleCry, were disappointed this Sunday to find that nothing had been posted on the Convention of States YouTube channel.

We discovered that, without warning and with almost zero explanation, YouTube had pulled Mark's show from their platform.

Why? Because he had supposedly violated the site's "medical misinformation policy." We received this note from our Big Tech overlords. 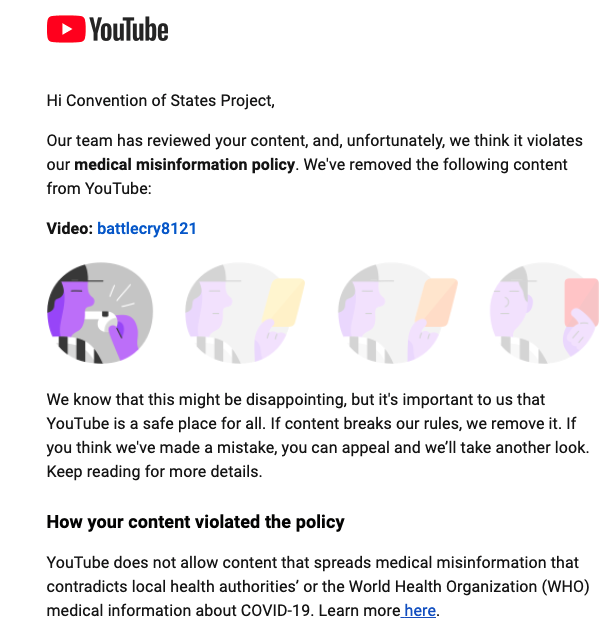 What did Mark say that supposedly violated YouTube's misinformation policy? Did he encourage his viewers to skip the COVID-19 vaccine or claim that the shot is dangerous or ineffective?

He criticized the greatest of all doctors, Dr. Anthony Fauci.

"What is going on with Fauci?" Mark asked. "I think that Fauci has lost his mind. This guy's not a public servant. This guy's acting like a king."

For this grave sin, Mark's show was pulled from YouTube and our channel received a strike. With enough strikes, Big Tech will have the excuse to totally shut down our channel.

Fortunately, we've seen this coming. We know that eventually Big Tech will do the will of their friends in D.C. and try to squash the Convention of States movement. That's why we're dedicated to finding alternative ways to communicate with our supporters, so we've been publishing much of our content on sites like Rumble and Mark's Locals.com account.

As we move forward, it will be increasingly important for liberty-loving Americans to find alternative ways to communicate, organize, and share the truth. Big Tech controls much of the information in our country, and they've communicated clearly their support for big government crackdowns on Americans' right to free speech.

To maintain our momentum and continue the fight for a Convention of States, we can't let tech companies like YouTube and Facebook delay our efforts by restricting our ability to communicate with our amazing volunteers and supporters around the nation.

When the crackdown comes, there will be lots of ways to stay in touch. First, be sure that you're signed up for our email list by signing the Convention of States Petition below. Next, create an account and follow us on the various alternative social media sites where we have an account.

For the simple crime of speaking the truth, Big Tech has taken down the social media accounts of dozens of conservative and freedom-loving organizations. They've already started laying the groundwork for when they do the same to us. They can't stand it when Americans question their authoritarian ideology that seeks to centralize power in Washington, and the greatest threat to their regime is an Article V Convention of States.

To help us ensure our movement's success and to stay up to date on the latest news and information, follow us on MeWe, Parler, and Rumble.