Do you get a lot of questions when you bring Convention of States up in conversations? I recently read a couple articles about Article V that help me give clearer answers.

The first was by Michael Farris and answers many JBS (John Birch Society) questions about Article V. The second was by Common Cause and describes what they see as a threat posed by Article V.

There is quite a bit of reading (38 pages) that many will find too time-consuming. If you are interested in the original articles, the links above will take you to them. I found both of them to be well worth my time as a basis for this post.

Is our Constitution at risk of being totally rewritten?

A common theme of many internet posts on Article V is that the process of the states proposing amendments is very scary, or even an outright dangerous process, that opens the entire Constitution to being rewritten.

In fact the article by Common Cause clearly states, “The result of such a convention could be a complete overhaul of the Constitution…”

Nothing could be farther from the truth.

A careful reading of Article V discloses that there is no difference between amendments made by Congress and those made by the states. Both entities require a two-thirds majority to propose an amendment. Amendments put forth by either are required to be ratified by three-quarters of the States. In both cases, the mode of ratification is chosen by Congress.

However, there is one major difference. The states must submit applications to Congress requesting an Article V convention. Once Congress receives applications from two-thirds of the states, they decide whether or not the applications aggregate (that is, whether they are asking for the same thing).

Once it is determined that they aggregate, Article V states, “Congress shall call a convention for proposing amendments.”

They are also limited to amendments within the scope of the application. The resolution submitted by the South Carolina House can be read by following this link: H 3233.

Notably, there are no such restrictions on what Congress may propose. Article V simply states, “...Congress, whenever two-thirds of both Houses shall deem it necessary, shall propose amendments...”

Congress is answerable to no one in this regard. The only restraint on what they propose is the fact that their proposals must go through the ratification process by three-quarters of the states.

It should be clear to anyone who reads Article V that it does not open up the Constitution to radical changes. Neither Congress or the states have the power for “complete overhaul of the Constitution” as stated in the Common Cause article. That comment is just smoke and mirrors designed to place fear and doubt into the hearts and minds of people who have not studied the issue.

The sole purpose of Article V is to allow Congress, or two-thirds of the states, to propose amendments to the Constitution. In no way does it suggest that anything beyond proposing amendments is even possible under the article.

Yet many of the posts use the term "constitutional convention" as a method of misleading the readers to picture a rewriting of the Constitution.

One must keep in mind the clear purpose of Article V is to amend the Constitution, not to rewrite it, or any part of it.

Outright lies like the one above (a complete overhaul of the Constitution) are used by people and/or organizations who desire to fight against something when they do not have facts to back up their position.

At that point, almost any plausible-sounding lie can be used in place of a reasonable argument, because the uninformed do not recognize it as a lie. If they hear it repeated often enough, it becomes believed through repetition.

What are the safeguards?

Another common theme among many posts is that there may be a "runaway convention" in which amendments get proposed that are not part of the resolution calling for the convention.

There are two salient points about this. 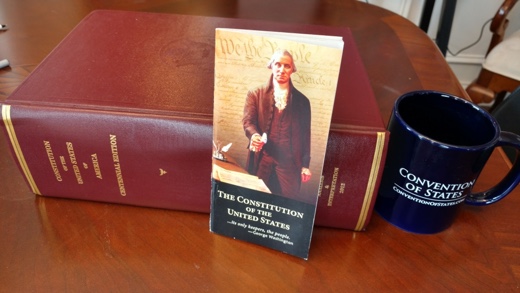 So, just how big is the Constitution anyway?

A hard copy of the original Constitution with all twenty-seven amendments and the Declaration of Independence is reprinted on 39 pages measuring 3.25 by 6.5 inches and weighing in at less than one ounce. It can easily be carried in a shirt pocket.

Compare that with the Constitution we are following today. It is a behemoth weighing over nine pounds and contains references to nearly 8,000 Supreme Court cases. The hardbound copy can be obtained from the government printing office at a cost of $145.

When the Supreme Court decides to accept a case, the Annotated Constitution is the one used to decide the case, not the original Constitution and its amendments. So if your fear is of our Constitution being rewritten, that is already happening. That is why it is so important that we support Convention of States.

COS is a grassroots organization founded for the specific purpose of educating state legislators about the truth contained in Article V so they will support a resolution to hold the first-ever Article V amendments convention.

COS believes that in order for the states to regain the sovereignty written into the Constitution, we must propose amendments in the following three areas:

2. Restraint of federal power and overreach

COS also believes amendments in any one of these areas alone will not be strong enough to regain control over the federal government. It will take well-designed proposals in all three areas.

Without your support, our republic is in serious jeopardy of ending up on the trash heap of failed governments.

Please go to conventionofstates.com now. Get informed and get involved.