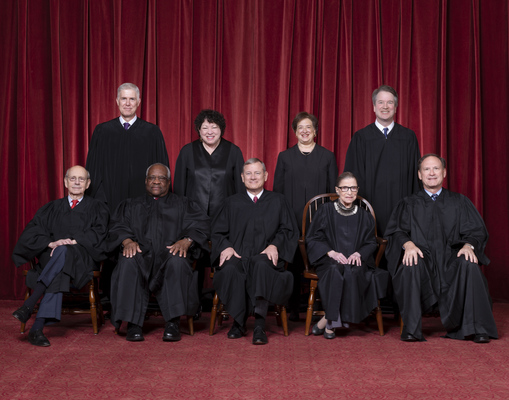 By now you've heard about this week's decisions from the U.S. Supreme Court. Conservative Review's Daniel Horowitz sums them up well in a piece entitled, "Conservatives get massacred by fake 'conservative' SCOTUS":

Within 35 minutes today at 10 a.m. Eastern, what some thought was the most conservative Supreme Court of all time concocted a fundamental right to transgenderism in the context of labor law, erased the Second Amendment, and interfered with a state death penalty case, but declined to interfere with a California law that criminalizes law enforcement cooperation with federal immigration agents.

Taken in totality, the “conservative” legal movement, which has promoted the idea of “appointing better judges” rather than fighting the entire concept of judicial supremacism, has failed miserably. This was its Waterloo.

Whatever you believe about each individual decision, you can't deny that the Court has -- once again -- significantly expanded the power of the federal government. Rather than leave policies about employment and gender to local and state governments, they've effectively rewritten federal law to cram a policy down the throats of every American citizen nationwide.

By contrast, they have failed to settle the disputes around gun rights and the Second Amendment -- a provision, unlike gender, that can actually be found in the Constitution.

If you were hoping that Washington would fix itself, this should be your wake up call.

Washington will never limit its own power. The Court, no matter how "conservative," will never rule to eliminate judicial supremacism. Their rulings have the force of a constitutional amendment. Each decision proposes and ratifies a new amendment without the approval of the states and the people, and there's no recourse.

The only way to reverse these decisions is via another Court decision or a constitutional amendment. Since the Court will never reverse a 6-3 decision and Congress will never propose an amendment limiting the power of the federal government, the states and the people must take charge.

Article V of the Constitution allows the states to call a convention to propose constitutional amendments. These amendments, once ratified by 38 states, can limit the power and jurisdiction of the Supreme Court, impose term limits on federal officials (including justices), and mandate fiscal responsibility in Congress.

This is the only recourse left to We the People to restore the balance of power between D.C. and the states. We cannot let nine non-elected justices continue to dictate policy for all 330 million Americans. The Founders gave us a tool in Article V to end federal overreach, and it's time we used it.